Germany's agriculture minister expects bird flu to spread throughout the country and urged officials to prepare for a worst-case scenario. Efforts to contain the disease have top priority, he said. 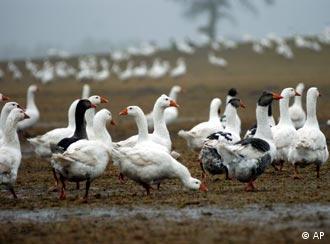 Gone are the days of free ranging birds

After visiting the Baltic Sea island of Rügen, German Agriculture Minister Horst Seehofer told health and veterinary officials in the rest of the country to be rigorous in enforcing measures to lock down all domestic birds and keep track of reported carcasses. "We must expect that this will expand to other geographical areas," he said at a news conference on Friday, urging state governments to prepare for a worst-case scenario.

"There will be zero tolerance," he added and warned that the rapidly spreading H5N1 virus, which so far has only infected migratory birds in Germany, could easily jump over to poultry livestock. From that point, it is also possible the disease could spread to humans.

On Saturday, the minister sharply criticized the ineffective containment strategy on the island. Pointing out that the media and general public had access to the collection points where the dead birds where discovered, Seehofer said efforts to close off the area and prevent the spread of the disease where ineffective. 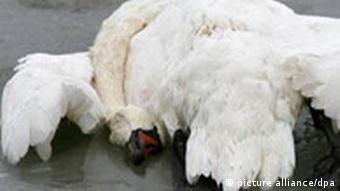 Dead swans are littering the coast of Rügen.

"Our immediate responsibility is to contain the disease. We must make certain it does not spread from wild fowl to livestock," Seehofer stressed. He called for a complete cordoning off of collection points.

According to the Friedrich Loeffler Institute, the disease is highly contagious and can easily be picked up and spread when people walk through bird droppings in contaminated areas. Therefore, all individuals with access to the dead birds are required to disinfect their shoes and vehicles passing through the infected areas must be sprayed down with disinfectant. No one with access to the carcasses is allowed to come in contact with domestic birds, where an outbreak of the disease would be especially detrimental. 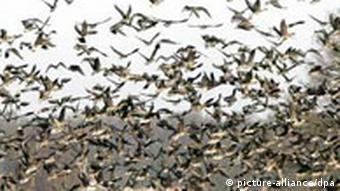 Tests so far have confirmed that 30 more birds found dead on the northern German island were infected with the deadly H5N1 bird flu virus. The expanded testing of wild birds on Rügen showed that swans, whooper swans and geese tested positive for the most deadly strain of avian influenza. The results follow previously confirmed cases earlier in the week.

The agriculture ministry reported on Friday that one of the dead swans discovered on Feb. 8 and tested for the worst strain of H5N1 had been ringed in Latvia last August. Seehofer said this fact gave rise to a theory that the virus was "being spread from east to west."

So far, the virus has only appeared in migratory fowl. No poultry has tested positive for the deadly virus, and as far as authorities know, no other domestic birds have shown traces of the disease.

Officials on the Baltic island of Rügen have appealed to the military for help in collecting dead birds and disinfecting contaminated areas. The defense ministry has responded with aid. (Feb. 18, 2006)

Here is a country-by-country breakdown of confirmed cases of avian flu in humans, as reported by the United Nations World Health Organisation (WHO). (Feb. 16, 2006)