′Fear and shock′ in Nepal following massive earthquake | Asia| An in-depth look at news from across the continent | DW | 25.04.2015

Hundreds of people have been killed in a powerful earthquake that struck the Himalayan nation of Nepal. DW spoke to The Asia Foundation's George Varughese, who witnessed the disaster in the capital, Kathmandu. 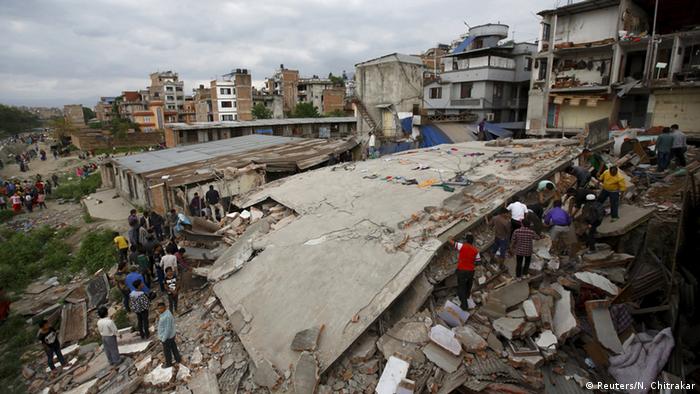 On Saturday, April 25, around noon local time, a 7.8 magnitude quake struck an area between the densely populated Nepalese capital, Kathmandu, and the city of Pokhara, with tremors felt across several countries, including neighboring India. More than 700 people have been confirmed dead across the region.

A magnitude 6.6 aftershock hit about an hour later, with several smaller aftershocks jolting the region for hours. The tremor has left scenes of devastation in the Nepalese capital, including tumbled walls, collapsed towers and large cracks in streets and walls.

In a DW interview, George Varughese, a Kathmandu resident and Nepal country representative for The Asia Foundation, talks about the extent of the damage, the government's initial response and his own experience of the disaster.

DW: What can you tell us about the extent of the damage caused by the quake?

George Varughese: This is a question that nobody can answer authoritatively at the moment given that communications are down and roads are impassable at the moment. A lot of the buildings that have collapsed in Kathmandu are blocking the roads, thus preventing ambulances and other emergency vehicles from getting through. 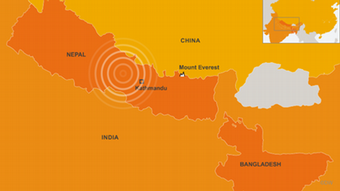 Varughese: 'It is really difficult to establish the extent of the damage'

In general, we understand that the worst damage was caused in the older quarters of the Kathmandu Valley, including an area around Sundhara, where the historic Dharahara (Bhimsen) Tower was also destroyed. There is nothing left of the tower except for its foundations. Similarly, the historic district of Bhaktapur and the cultural neighborhood of Patan are affected.

Do you have any information as to how many people have been killed in the quake?

More than 550 people have been confirmed dead in Kathmandu alone and the death toll is expected to rise even further. The hospitals are overwhelmed by the high number of casualties, so many of the injured are being treated out in the open. There are simply not enough beds in the hospitals available at the moment.

How did you experience the quake?

We must take into account that today is not a working day in Nepal so a lot of people were not in their offices in the city, but at home or strolling about. The quake struck shortly before noon so everyone was awake. I myself was with my family in the house around 11:30 a.m. when it struck. We managed to run outside, but the convulsions were so extreme that we were knocked off our feet several times. We have been sitting outside the house for hours now.

Authorities in Nepal say the death toll from a magnitude 7.8 earthquake is rising as bodies are retrieved from rubble. Many survivors are spending the night in the streets. (25.04.2015)

Nepalese officials currently put the death toll from a magnitude 7.8 earthquake west of Kathmandu at more than 700, and climbing. The quake toppled temples and a beloved landmark, also causing a Mount Everest avalanche. (25.04.2015)

A powerful earthquake has struck in Nepal, put at a magnitude of 7.9 by the US Geological Survey. The epicenter was to the west and north of Kathmandu, dozens were feared trapped in the rubble of a 19th century tower. (25.04.2015)

How have Kathmandu residents reacted to this disaster?

Most of the open areas are jammed with people sitting and waiting in a state of shock. Nobody is occupying the houses; everybody is outside. The first reaction has been one of complete fear and terror. This was a very strong earthquake and I would expect the aftershocks to last for at least two or three days.

How have the authorities reacted?

The authorities have, unfortunately, been struggling to react and cope. The police are trying to keep the roads open and control the crowds, but there has been no real palpable sense of direction so far. Unfortunately, the Nepali state has become increasingly incapable over the past few years, especially in dealing with such disasters. The airport is closed for commercial inbound traffic today; the runway seems to be intact, but only emergency helicopters are being operated.

What do the people affected need the most?

We need the authorities to start informing the people about what has happened and the extent of the damage. There is simply not enough information out there about what to do next, tonight or tomorrow. We also need to see more emergency response providers on the ground recovering buried persons and triaging at the sites.

I see people running around trying to get their loved ones to a hospital, and slowly people are shaking off their fear and paralysis. I fear that the death toll may easily surpass 1,000, which, while high, is relatively low for a quake of this magnitude in a congested urban area. I'm sure drinking water and sanitation will become pressing needs in the days ahead.

Have other parts of the country been affected?

Yes, other parts of the country have also been affected, though it is really difficult to establish the extent of the damage. Most of the rural areas and villages near the epicenter have also experienced structural damage. An estimated 30-plus districts are affected, with reports of 300 deaths so far. 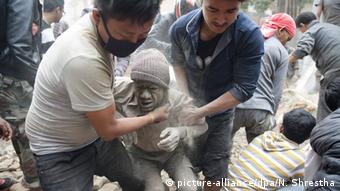 Varughese: 'Most of the open areas are jammed with people sitting and waiting in a state of shock'

What can the international community do to help?

We urgently need equipment and emergency response teams. But, at the moment, it is likely that only Indian air force planes will arrive today. The airport is not fully open and not really equipped to handle emergency operations of magnitude. During the hour of the quake, the control tower had only one person, with others having run outside. It was apparent that the three planes holding above the airport had difficulty landing for lack of communication from the tower. I wonder if the tower has hand-held VHF radios to guide incoming aircraft during emergencies.

Although the country has received assistance in disaster management over the past few years, the basic tools and initial responses are still not in place and unpracticed when disaster strikes. We can only hope that this triggers serious reflection about responsibilities and capabilities in emergencies, to which Nepal is always vulnerable.

George Varughese is the Asia Foundation's country representative in Nepal. He is an expert in governance and politics in Nepal and Afghanistan.