Nepalese officials currently put the death toll from a magnitude 7.8 earthquake west of Kathmandu at more than 700, and climbing. The quake toppled temples and a beloved landmark, also causing a Mount Everest avalanche. 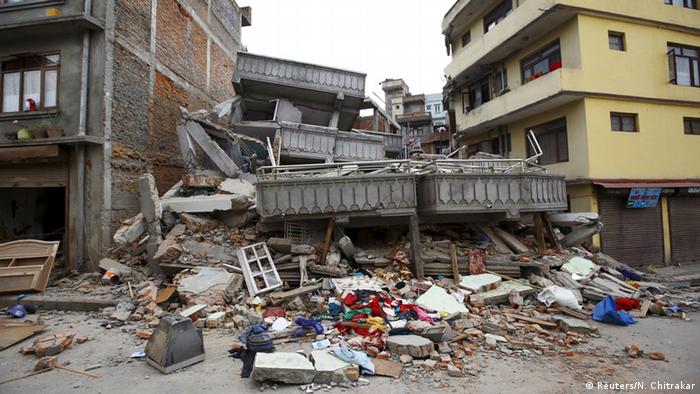 Home ministry officials and police in Kathmandu on Saturday issued regular updates on the casualties from the quake, the strongest to hit Nepal in 81 years. By mid-evening, the tally had cleared 700 people, the majority of them in the Kathmandu Valley region - Nepal's most densely populated area, where the tremor struck.

"Rescue efforts are still underway. We fear that the toll might rise as we dig through the rubble," police spokesman Kamal Singh told the AFP news agency.

The city's international airport was briefly closed as a precaution, with flights diverted to neighboring India. A beloved local landmark, the Dharahara - or Bhimsen Tower - collapsed with dozens inside. First built in 1832, it was toppled in Kathmandu's major 1934 earthquake and subsequently restored. 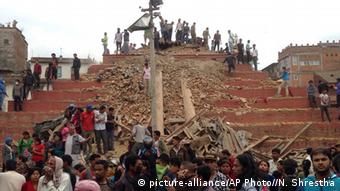 "Kathmandu Durbar Square, a historic UNESCO heritage site, has turned into rubble. All the temples are destroyed. There was a blood donation in the camp going on at one of the heritage sites. The building collapsed and it seems everyone is dead," a Kathmandu-based journalist, Kashish Shrestha, told the DPA news agency.

The Kathmandu Valley is home to dozens of temples and pilgrimage sites revered by Hindus and Buddhists.

A government official in neighboring India said that at least 20 people had died there as a result of the earthquake. At least two died in Bangladesh, and the government in Beijing said that two Chinese citizens died on the border with Nepal. Back in Nepal, in the Himalayas, an avalanche swept the face of Mount Everest base camp where most of the climbing expeditions have settled in the aftermath of the quake. A senior guide, Ang Tshering, said 30 were injured. Nepal's home ministry later said that at least eight people were feared dead on the mountain. 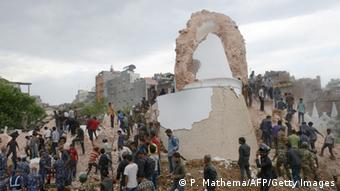 Rebuilt after the city's last major tremblor, the Dharahara was toppled again

"We are starting to receive the injured, the most severe of them with many fractures, he was blown away by the avalanche and broke both legs. For the camps closer to where the avalanche hit, our Sherpas believe that a lot of people may have been buried in their tents," Danish climber Carsten Lillelund Pedersen wrote on Facebook.

He also said a steady flow of climbers were fleeing the base camp, headed back down the mountain for more secure areas. Almost a year ago, a severe Everest landslide killed 16 Sherpa guides, who help the hundreds seeking to scale the world's highest peak each year.

The quake struck just before midday local time, at 06:11:26 GMT/UTC. The United States Geological Survey (USGS) put its magnitude at 7.8, having adjusted the severity slightly several times since the tremor. For several hours, it was reported at 7.9, after initially registering at 7.5. Such adjustments are commonplace.

The USGS said the quake's epicenter was 15 kilometers (9.3 miles) deep, some 80 kilometers west-northwest of the capital, Kathmandu.

"We are still getting the aftershock, three hours after the first quake hit Kathmandu. I went to the old city area, and many houses and buildings are completely destroyed," journalist Shrestha told DPA.

At the main hospital in Kathmandu, dozens of injured were rushed in for treatment. Pushpa Das, a laborer, ran from the house as the quake started, but could not avoid a collapsing wall that injured his arm. 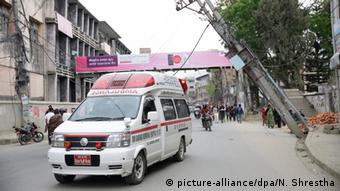 Emergency services sought to respond, in one of the world's poorest countries

"It was very scary. The earth was moving ... I am waiting for treatment, but the [hospital] staff is overwhelmed," he told an Associated Press reporter, holding up his right arm with his left hand.

More than a dozen aftershocks rattled the Himalayan region in the subsequent hours, the strongest registering 6.6. The tremors were reportedly felt as far afield as Pakistan, Tibet and China.

Nepal's Kathmandu Valley lies on a major fault line. A 1934 quake, with a magnitude of 8.4, destroyed more than 80,000 buildings and claimed around 8,500 lives, according to the UN. Now Kathmandu Valley is a far more densely populated region, home to around 2.5 million people. Many buildings in the region are of poor quality.

A powerful earthquake has struck in Nepal, put at a magnitude of 7.9 by the US Geological Survey. The epicenter was to the west and north of Kathmandu, dozens were feared trapped in the rubble of a 19th century tower. (25.04.2015)