Father of German-Iraqi Hostage Appeals to Kidnappers | Germany | News and in-depth reporting from Berlin and beyond | DW | 25.04.2008

The father of a German hostage made an appeal for his son's immediate release in a video message produced by a German broadcaster. His captors have demanded that Germany withdraw troops from Afghanistan. 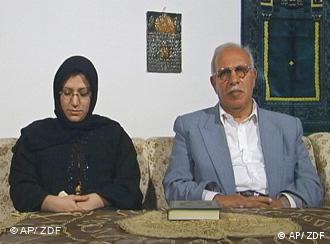 Iraqi doctor Mohamed Al Tornachi called for the release of 21-year-old Sinan Krause, who was abducted with his German mother, Hannelore Krause, in February 2007 from her house in Baghdad.

She was released in July of last year.

"We hope that our dear son Sinan will also be free soon," Al Tornachi said in a video message in Arabic, which was posted on German public broadcaster ZDF's Web site on Thursday, April 24.

ZDF's deputy editor-in-chief Elmar Thevessen said his broadcaster had offered the video to several Arab partners, including Al Jazeera and Al Arabiya, and that they had shown interest in it.

The kidnappers, who reportedly belong to the militant Islamist group "The Arrows of Righteousness Brigade," have threatened to execute Krause if Germany does not pull its troops out of Afghanistan. Some 3,500 German troops are stationed in northern Afghanistan, where they are mainly involved in peacekeeping and reconstruction.

"The crisis team at the Foreign Ministry continues to work intensively on finding a solution," said a spokeswoman Thursday, confirming that the ministry knew of the video.

Hannelore Krause immigrated to Iraq some 40 years ago. Sinan Krause, who married shortly before his abduction, was employed at the Iraqi Foreign Ministry in Baghdad.

Police training conducted by German experts in Libya was a repayment for Tripoli's help in securing the release of German hostages in the Philippines, according to a German newspaper report. (06.04.2008)

German and Afghan authorities are searching for leads two days after a German living in Afghanistan was kidnapped by armed gunmen. Police doubt he was taken hostage for political reasons. (18.12.2007)

We're interested in your opinion. Please send us an email and include your name and country.