A Berlin court has handed down suspended prison sentences to the head of the anti-foreigner NPD party for handing out pamphlets inciting racial hatred and defamation during the 2006 World Cup. 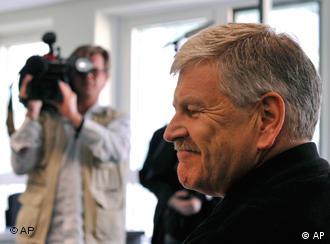 The three had circulated pamphlets during the 2006 World Cup, insinuating that a black player was not worthy to play for Germany's national team which they said should be made up of whites only.

The pamphlet referred to defender Patrick Owomoyela who was born of a German mother and a Nigerian father.

The flyers showed the German team's traditional white jersey imprinted with the No. 25 - worn then by Owomoyela - over the title: "White, not just a jersey color! For a real NATIONAL team!"

All three NPD officials were ordered to donate 2,000 euros each to the UN children's fund, UNICEF. The three officials could have been sent to prison for up to three years.

The NPD party has many neo-Nazi supporters and is represented in two of Germany's 16 state parliaments, but has never won seats at federal level.

The party is in serious financial trouble after being fined 2.5 million euros earlier this month for filing incorrect financial statements.

An attempt to ban the party was failed in 2003 when the government application was thrown out by Germany's constitutional court.

Most Readers Do Not Support Ban of Right-Wing NPD Party

Readers' minds were on Germany's political wings this week as most wrote in to say they do not support a ban of the main far-right group, the National Democratic Party (NPD), while others pondered the rise of the Left. (27.05.2008)