The nationalist party claims that Eintracht Frankfurt President Peter Fischer slandered them. In interviews, Fischer has called the party 'Nazis' and said he would refuse its members entrance to his football club. 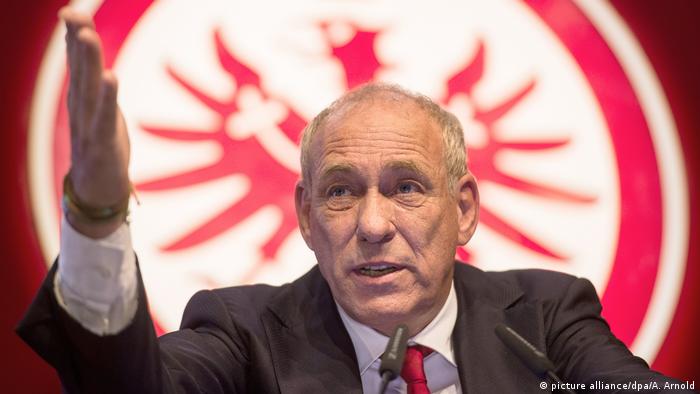 The far-right Alternative for Germany (AfD) filed charges of defamation against the president of Eintracht Frankfurt football club on Wednesday.

The party alleged that Peter Fischer (above) slandered them in interviews when he referred to them as Nazis and called them "brown" — a reference to the uniforms of the Third Reich.

Fischer told Hessicher Rundfunk radio that he did not want to see AfD members in the stands because their anti-immigrant, anti-Islam rhetoric violated the club's ethics.

"There is no place here for the brown brood," Fischer said. "As long as I am here, there will be no Nazis at Eintracht Frankfurt."

Previously, Fischer had told the Frankfurter Allgemeine newspaper that "no one can join us who chooses a party that has racist and inhumane policies."

The statements prompted the AfD's parliamentary leader Alice Weidel to tweet that it was "somehow funny for third-class peasants of a football club" to express themselves that way.

According to the party, two of their members submitted applications to join the club but had not yet received responses.

Klaus Hermann, the leader of the AfD in the state of Hesse, where Frankfurt is located, announced the filing of the charges. "We would have preferred not to take this step, but unacceptable terms like 'brown brood' and 'Nazis'…can and must not be tolerated," said Hermann.

AfD spokesman Robert Lambrou encouraged party supporters and critics of Fischer to join the club before its January 28 general meeting, to launch a protest against the president in person.