A telegram sent to Hitler on the eve of his downfall has been sold in the US for two-and-a-half times the expected price. The document was sent by Nazi leader Hermann Göring in the final days of the war. 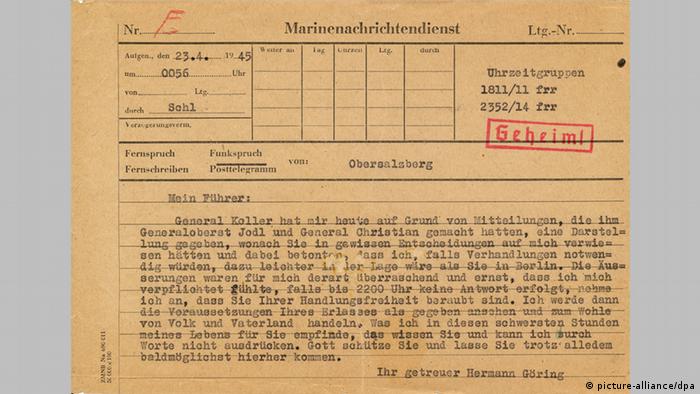 World War II was tapering to an end in 1945 and the Nazi leadership knew the worst was coming for them. Hermann Göring was Adolf Hitler's second-in-command.

While Göring was in southern Germany at the time, he got word that Hitler was in hiding in a bunker in Berlin and wanted to turn the country over to him. Göring then sent Hitler a brief telegram on April 23, 1945, asking to take charge. If he didn't receive a reply by 22:00 that evening, he would assume that Hitler had lost his freedom of action and take up the reigns of the falling regime, wrote Göring.

With the message, the Nazi leader risked treason, but was concerned that if he waited, his chance at power would pass him by. According to accounts of those close to Hitler, the telegram threw the Führer into rage and contributed to the disintegration of his mental state. In Hitler's testament, written on April 29, 1945, Göring was formally dismissed of all authority. Hitler and his partner, Eva Braun, committed suicide the following day.

The war ended just days later and Hermann Göring later took his own life after being convicted of war crimes during the Nuremberg Trials. But the telegram he sent on the night of April 23 went down in history as a symbol of desperation of a besieged regime.

The piece of paper, yellowed by time but still in good condition, was expected to sell for $20,000 at the Alexander Historical Auctions in Stamford near New York on Tuesday (07.07.2015). Instead, an unnamed buyer in North America claimed it for $54,675. The telegram had survived the past 70 because an American soldier kept it as a souvenir after the war.

More than a million Ukrainian Jews were murdered by German troops under Hitler. A German-government financed project has created the first five monuments in Ukraine honoring the dead. Michael Scaturro reports from Lviv. (06.07.2015)

It had been looted by the Nazis, hidden for decades, and then discovered in a dramatic art raid. Now Max Liebermann's famous "Two Riders on a Beach" has been auctioned by Sotheby's for over $2.9 million. (25.06.2015)