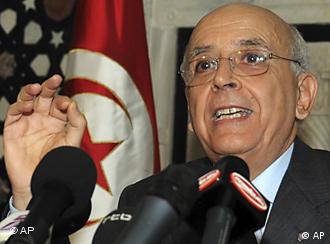 Ghannouchi is heading the interim government

Mohamed Ghannouchi also announced that the government was committed to releasing all political prisoners, and that anyone suspected of corruption would face investigation.

"We are committed to intensifying our efforts to re-establish calm and peace in the hearts of all Tunisians. Our priority is security, as well as political and economic reform," Ghannouchi told a news conference.

The ministers of defense, interior, finance and foreign affairs will keep their jobs in the new unity government. Three opposition leaders - Ahmed Nejib Chebbi, Ahmed Brahim and Mustapha Ben Jaafar - will be brought into the government. 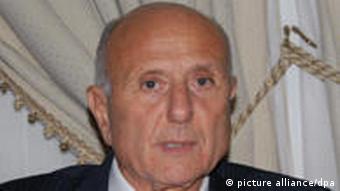 Opposition leader Nejib Chebbi will be a new minister

Chebbi, founder of the Progressive Democratic Party, the biggest of the legalized opposition parties, was named minister for regional development.

Brahim, who heads the Ettajdid Movement, a leftist party that grew out of the Communist Party, was appointed minister for higher education and scientific research. And Ben Jaafar, leader of Union of Freedom and Labor, became health minister.

Despite the announcement, the uncertainty continued on the streets of the capital, Tunis. About 1,000 demonstrators took to the streets earlier on Monday demanding that the rest of Ben Ali’s ruling party also step down. They said they would not accept members of the Ben Ali government in the new coalition.

Overnight, shooting was heard in parts of Tunis, after clashes between special forces and members of the former president's security squad.

Tanks and soldiers were stationed on the streets of Tunis, and the US embassy said it would evacuate family members to Rabat in Morocco on Tuesday.

Tunisia’s government said Monday that more than 78 protesters and other civilians had died in the unrest in the last month. Nearly 100 people have been injured. The Interior Minister Ahmed Friaa added that the troubles had cost the Tunisian economy 2 billion dollars (1.5 billion euros). He reported damage by vandalism to police stations, town halls, banks, factories, as well as shops.

UN Secretary General Ban Ki-moon called for the establishment of the rule of law in Tunisia, and the Arab League said Arab states should consider what lessons could be learned from the crisis.

A statement from the European Union's High Representative for Foreign Affairs Catherine Ashton called for a democratic transition in Tunisia. 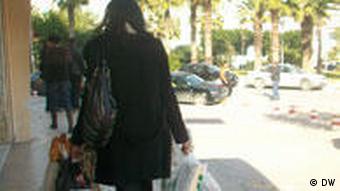 People were venturing out to the shops again

Exiled Tunisian party leader Moncef Marzouki meanwhile referred to the interim government as a "masquerade." The medical professor, who has lived in France since his Congress for the Republic party was banned, announced his intention to return to Tunisia and run for president.

The were long queues from bread and groceries in Tunis on Monday, as people stocked up on food after several days when shops were shut and most people stayed in their homes.

Constitutional authorities have said new elections must be held within 60 days, after Ben Ali fled to Saudi Arabia on Friday.

The ouster of Tunisia's leader has sent shockwaves around the Arab world as he was the first Arab leader in recent history to be forced out by street protests. European editorial comment is wary of the country's future. (17.01.2011)

Despite an announcement that an interim government is in place, Tunisians have returned to the streets to protest the ruling party of departed President Ben Ali. (17.01.2011)