In 1989 East German calls for democracy reach a highpoint. When the East German government announces new travel regulations, hundreds of thousands of people gather at the Berlin Wall, and the checkpoints finally open. 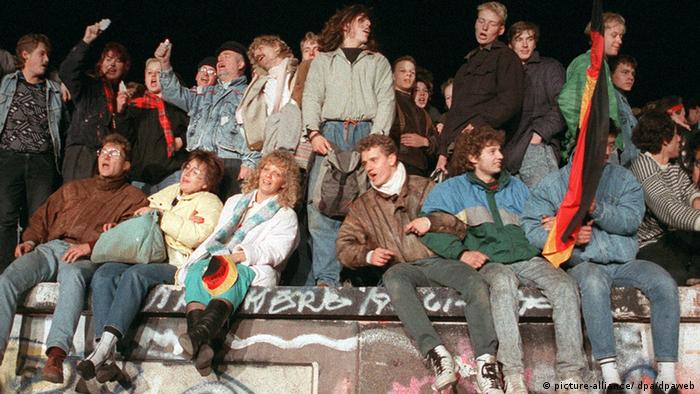 Young Germans celebrate the fall of the Wall.

Following the obvious manipulation of local elections in Mai 1989, East Germans begin protesting against the government. They form grassroots civil rights movements and unite for peaceful demonstrations. In the summer of 1989 some ten thousand East Germans flee across the open borders between Hungary and Austria to West Germany. The leadership of the Social Unity Party (SED) starts to give in under the growing protest movement. On November 9, 1989, the government relaxes travel regulations, allowing East Germans to cross the borders. When hundreds of thousands of people gather at the Wall, the leadership is unable to withstand the pressure, and the Berlin Wall falls.

It didn't take long for the call "We are the people!" to become "We are ONE people". It was the rallying cry of the East Germans for unity with the West. The two German states and the four Allies, France, Great Britain, the United States and the Soviet Union, pave the way for political reunification with the Two-Plus-Four Agreement. On October 3, 1990 the GDR becomes part of the Federal Republic of Germany.

Deutsche Welle looks back at 20 years of reunification

How have the two Germanies grown together and what can the world learn from their lessons? A multimedia special on the 20th anniversary of reunification (29.09.2010)

Germany is gearing up for its national day, when the country celebrates the Oct. 3, 1990 unification of West and East Germany. DW-WORLD spoke to the foreign minister at the time, Hans-Dietrich Genscher. (03.10.2005)

Live recordings of Germans celebrating the collapse of the Berlin Wall on November 9, 1989

What's left of the Wall? DW reporter Andrew Bowen accompanies protestors who want to keep he last remaining section of the Berlin wall in place (8.3.2012)