Germany is gearing up for its national day, when the country celebrates the Oct. 3, 1990 unification of West and East Germany. DW-WORLD spoke to the foreign minister at the time, Hans-Dietrich Genscher. 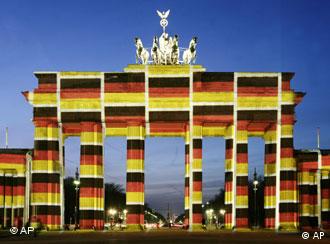 The Brandenburg Gate in Berlin became the symbol of united Germany

Hans-Dietrich Genscher served as foreign minister of the Federal Republic of Germany from 1974 to 1992. Born in 1927, he grew up in the eastern German town of Halle. After the war, he studied law and left East Germany for the West in 1952, where he joined the Free Democratic Party (FDP). He was a member of the Bundestag from 1965-1998. As foreign minister in the Christian Union-FDP coalition government led by Chancellor Helmut Kohl, Genscher was instrumental in German unification.

DW-WORLD: Putting down Germany almost seems like a national sport. Tell me something positive about Germany today. Where can we see rays of hope?

Hans-Dietrich Genscher: First of all, in unification itself and in the fact that Germany today is an important and active member in the European Union. That applies to the Germans in the north and south, in east and in west. That's why I don't see any occasion for such negative appraisals. Germany faces big problems. We must carry out reforms. That has less to do with unification than with, on the one hand, the consequences of socialist mismanagement before unification, and on the other hand, that the age structure in our society is changing, that we have to hold our own in the face of globalization's challenges.

I think people differentiate ever less often between eastern and western Germany. The young generation sees our country's future in Europe as a shared challenge. For decades, we Germans had to live apart against our will in two very different political systems. That's no longer the case. The future is a common future. To hold our own in the face of this challenge is also a shared challenge and a shared purpose. 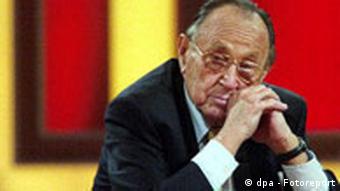 The wall in people's heads is still there. Why do western Germans still have so many prejudices against eastern Germans and vice versa?

I don't have that impression at all. My experience of many eastern Germans making their way in the West is that they feel like Germans. I have the feeling that people might talk about "the wall in the heads" with relish, but it's not a reality.

Around this time last year, you pointed out that uniformity of living conditions in eastern and western Germany was a "valid constitutional right." Fifteen years ago, how long did you expect it would take for living conditions to reach a similar level?

I said it would be a long, rocky road and that there could also be (periods of) stagnancy and setback, but we would manage it. Nothing has changed in that assessment. After all, one can't magically sweep away the problems that were made over more than 40 years of socialist economy in the East over night. Anyone who said anything different either had no clue about the situation in the East or said something frivolously. But if you look at places in the East today with the most modern infrastructure in Germany, modern industry -- many small and medium-sized companies are being started.

If you look back on the past 15 years, do you think it was right to unify East and West Germany so quickly? 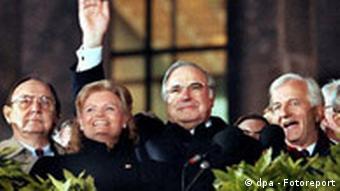 Genscher (from l.) with Hannelore and Helmut Kohl and German President Richard von Weizsäcker on Oct. 3, 1990 in Berlin

There was no other way. It was a window of opportunity in history that opened and we used it to peacefully implement German unification. It was absolutely right. In those days I had a different opinion regarding incentive measures. I thought that while the division (of Germany) was still in effect we should have fostered production in the East so that the added value would have provided an incentive to establish production facilities there. That didn't receive any backing from our coalition partner CDU/CSU or even from the Social Democrats. But there are repeated calls to try that route after all. In those days, the effect would have been without a doubt greater.

Recently a nationwide campaign was launched -- Du bist Deutschland (You are Germany) -- to motivate the depressed Germans. What does the country need to shake off the bad mood?

Above all, a government that inspires confidence, speaks openly about problems, but doesn't just complain about the problems, and instead identifies the possible solutions and takes that route reliably.

Two years ago, you said: "Grand coalition means grand stalemate." Now it seems likely we'll soon see a grand coalition of the Christian Union parties and the Social Democrats in government. What's your view of the immediate future? 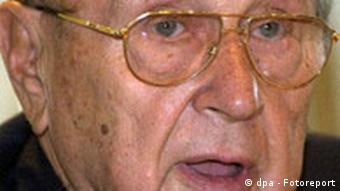 My opinion is unchanged: A grand coalition always means a two-way blockade culminating in wrong decisions. Today when people talk about how federalism reform is necessary, it's actually the call to finally undo what the grand coalition of 1966-1969 did wrong. That does not inspire confidence.

Both Major Parties Pleased With Talks

Both the Social Democratic and the conservative parties called Wednesday's talks "fruitful" and "serious," but added they were still not ready to formally negotiate, or decide on a chancellor. (Sept. 28, 2005)

The German government has, over the past years, been harshly criticized for its investment in rebuilding the former East Germany, but Berlin is sticking to its program of support. (Sept. 29, 2005)

Next week, East German states are required to tell Finance Minister Hans Eichel how they spent the billions of euros in subsidies the federal government transferred last year. A new study does not paint a pretty picture. (Sept. 28, 2005)