Britain and Argentina are once again sparring over the remote Falkland Islands. While experts don't expect another war over the archipelago, looming business interests could increase tensions between both sides. 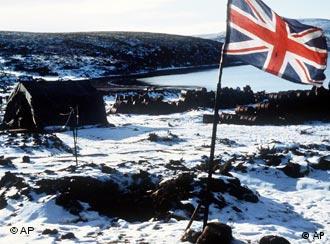 With British firms scheduled to start oil explorations around the Falklands Islands in the South Atlantic within days, Argentina didn't mince words. The country's foreign minister called the planned drilling "illegitimate" and a "violation of our sovereignty." He vowed: "We will do everything possible to defend and preserve our rights."

Last week Buenos Aires had called in Britain's top diplomat in the country and delivered an official protest over the oil exploration. And back in December, Argentina passed a law stating that the Malvinas, as the islands are called in Spanish, as well as some other British islands in the area belong to Buenos Aires. Also last year, the Argentine government again documented its claim over the Falklands to the United Nations.

The strong Argentine response to Britain's plans doesn't surprise Thomas Fischer, director of the Center for Latin American Studies at Catholic University Eichstaett-Ingolstadt: "When the British are in fact now beginning with oil and gas exploration then of course Argentina which has never given up its claim for the islands had to react and it did," he told Deutsche Welle.

London so far has tried to avoid any harsh rhetoric that might further escalate the situation. The British government through a junior minister refuted Argentina's claim to the Falklands, saying only it had no doubt over its sovereignty over the disputed islands.

While Buenos Aires has stepped up the diplomatic pressure, Britain has been pressing ahead with its economic plans for the area. It has cleared the way for four companies to begin with the exploration around the Falklands which some analysts believe could yield up to 60 billion gallons of oil.

Should those estimates prove to be true it could not only transform the remote islands into an oil hub, but it would also create a huge stream of revenues for Britain and the Falklands. The main company involved in the drilling, Desire Petroleum, has said that by the end of the year it will be know whether a major extraction operation will take place or not. Argentina claims sovereignty over the islands

That there are in fact oil and gas reserves around the Falklands has been known for a long time. More than a decade ago six wells were drilled in the area and all but one held oil or gas. But due to low oil prices and high extraction costs at the time exploration efforts were stopped. Since then not only has the oil price increased substantially, but the methods and costs for deep-sea drilling have also improved a great deal. So the question is not really whether there is oil and gas, but how much.

"Certainly the discovery of large oil reserves would change the underlying assumptions of the importance of these islands dramatically," Daniel Gossel, an expert on British foreign policy at the University of Kassel, told Deutsche Welle.

Until now the Falklands for both Britain and Argentina were primarily a matter of national pride and geostrategic interests. A large oil or gas find would make the islands all of a sudden also a major economic issue for both sides.

So who has the more convincing claim to the island? Good question, say the experts, but the answer remains elusive and depends largely on your perspective.

"There is no clarity on this issue," according to both Fischer and Gossel. Britain's claim to the islands is mainly based on the fact that it has continuously maintained a settlement on the islands since the 1830s and has established a government and a capital there. Argentina, however, claims that it owns the islands as part of its legacy from the Spain's colonial rule.

The dispute over the Falklands also came before the United Nations years ago, but the UN only urged both countries to solve the argument themselves in a peaceful manner. Britain, for obvious reasons, is not very interested in changing the status and has repeatedly rebuffed Argentine requests for talks over the Falklands.

The EU or the Organisation of American States (OAS) are also not seen as possible mediators, because both could be seen as partisan and neither of them has the political weight or will to do anything about the issue, say the experts, who predict that the dispute over the Falklands simply won't go away.

An oil boom could transform life on the Falklands

Still, even if large oil or gas reserves should be found in the area, a repeat of the Falklands War of 1982 in which more than 600 Argentines and more than 200 Britons were killed seems unlikely.

"I don't believe that it could come to that, because in the end neither Britain nor Argentina has a concrete interest in a military conflict over the Falklands," said Fischer.

"It's definitely an issue to arouse patriotism," said Gossel, "however I think both sides have learnt their lessons. Barking dogs usually don't bite."