One year after their spectacular rescue from the San José mine, some of the 33 miners are unemployed, others are sick and many are upset about broken promises. The gloss has waned for the politicians involved, too. 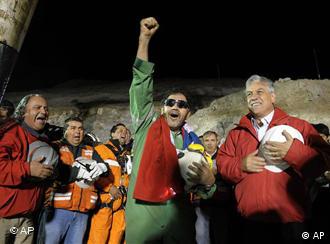 On October 13, 2010, the 33 trapped Chilean miners looked upon the blazing sunshine of the Atacama Desert for the first time in over two months.

It was remarkable they had survived at all, but their successful rescue after so long underground was positively incredible. They had been trapped 700 meters below ground for 69 days, in a mine that could have collapsed at any moment - especially considering the attempts to bore down into the mine and and save them.

The story first broke on August 5, and the Santiago-based daily paper La Tercera immediately dispatched one of its politics reporters, Carlos Vergara, to the scene.

Vergara got the call from his editor-in-chief, saying he should drop everything and head 800 kilometers north into the desert. A few days later, the vast lifeless expanse of desert seemed almost as unbearable for Vergara as the claustrophobic hellhole below it.

Laurence Golborne, Chile's mining minister at the time, was on a diplomatic visit to Ecuador with President Sebastian Pinera. He was dispatched home a day later to lead the rescue operation. Officially, the miners were presumed alive - but nobody knew for sure and most people feared the worst. 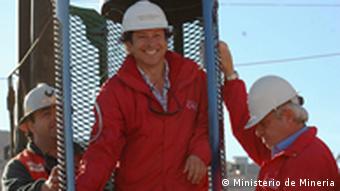 The then mining minister was the first politician on scene

"Those first 17 days were the toughest," Golborne, now the minister for infrastructure, told DW-WORLD.de. "We had no idea whether they were alive or not."

"The rescue was one of the most important moments of my life. It was just wonderful to know they had survived and to be able to share this amazing story with the world," said Golborne. The minister admitted to having many concerns - especially in the uncertain first days - but said the rescue team were always confident of a happy ending.

As family members flocked to the privately-owned mine, documenting their part in an increasingly dramatic story, the Chilean government realized it would have to take charge of the rescue efforts. Operation "Prophet Jonah" (named after the Old Testament legend of a meal ultimately unfit for a whale) was born, with Golborne in charge. Before long, the mining minister's popularity and recognition skyrocketed. 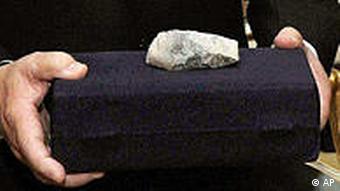 "That led to conflicts with the president," recalled Vergara. "He got involved with the rescue effort at a decisive moment: On August 22, when the 33 miners were located alive, Pinera thanked Golborne for his efforts and made it clear that his work was done. Pinera's insistence to regularly visit the mine was no coincidence either."

Once the rescue mission was completed, Pinera's approval rating skyrocketed to 63 percent in some polls - while Golborne was named Chile's most popular politician.

Pinera later gave a lump of rock from the San José mine to Queen Elizabeth II on a visit to Britain, and showed his counterparts at the UN General Assembly the legendary note written by the miners and tied to a probe that had been sent into the tunnels, reading: "All 33 of us are fine in the shelter."

"The popularity boost didn't last very long, with the exception of Golborne," said Vergara, pointing to an October 2011 poll putting Pinera's approval rating at 22 percent. Over the past year, lower-profile challenges like student protests and demands for education reform have not been met with the same aplomb.

The phrase "Chilean way" was coined after the dramatic rescue in front of 2,000 journalists from around the world, a term that was meant to show the country's ability to successfully solve difficult problems. Pinera used it again and again, saying it was important to show the world an image of an efficient, diligent and modern country.

For Golborne, the rescue was a "display of power," a moment when the whole country pulled together and rose to a challenge.

"This experience was unique: a disaster with a happy ending, followed live by millions of people. It was proof of togetherness and a sign of hope for the whole world," said Golborne.

But this sheen seems to have faded, with journalist Carlos Vergara arguing that the rescue "was, in the end, a fleeting success, with the government unable to fulfill the expectations that it stoked for other political successes."

On August 5, 2011, the 33 miners gathered at the president's La Moneda Palace for a memorial service one year after the mine's collapse. The ties between them have been broken. Accusations have flown between them of having cashed in on the experience or of having broken their promise to always stick together, a promise made when trapped 700 meters underground, at a time when they had no alternative.

Four of the miners recently travelled to Washington to visit an exhibition about their rescue. While some are still hoping for some kind of recognition, others have already given up hope. 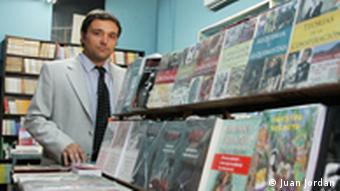 For Vergara, it was inevitable that the happy ending would turn sour

Fifteen of the 33 are currently unemployed. Many of them are ill, suffering from respiratory diseases like silicosis, or from diabetes, or simply from post-traumatic stress disorders after their 69-day ordeal.

"For a few days they were famous, but now everything's as gray as it was before. Edison Pena, the marathon runner among the miners, recently gave an interview from a rehab clinic where he explained how he had done nothing but drink since returning to the surface," Vergara told DW.

The journalist, however, doesn't think it's fair to say the miners have been exploited - pointing out that their contemporaries might never get a short-lived chance to travel the world, meet new people and earn a little money.

"In the end, everything's returned to normal," said Vergara. "The story of a miner is and will probably remain a long and unchanging story of poverty."

Chile: 'This is about the substance of our political demands'

Chilean student leader Camila Vallejo talks to Deutsche Welle about students' demands in her country and their criticism of a political system, which they say doesn't represent Chile's society. (15.09.2011)

A 48-hour national strike turned violent in Chile as protesters demanded reforms in the education and other sectors. They say that despite Chile's economic success, the society is plagued by stark inequality. (26.08.2011)

Wrapping up his visit to Europe, Chilean President Sebastian Pinera met with Chancellor Angela Merkel on Friday. Pinera said that tackling the problems of the 21st century required reforms to international institutions. (22.10.2010)

Chilean miners look back a year after dramatic rescue

The whole world cheered a decade ago when 33 trapped miners from the San Jose mine in the Atacama Desert were brought to the surface in a spectacular rescue operation. Today, however, many of the miners feel forgotten.