Radical and controversial artist Marina Abramovic is a cult figure in the art world. The retrospective "The Cleaner," on show at Bonn's Bundeskunsthalle museum, showcases works from all periods of her career.

Videos flashing the artist's face greet visitors at the entrance to the exhibition "The Cleaner," on show at Bonn's Bundeskunsthalle museum from April 20 to August 12. They feature excerpts from Abramovic's famous 2010 performance at the MoMa in New York, "The Artist is Present." For 90 days — seven hours a day, six days a week — she sat on a chair and did nothing but stare back at the people who would take the seat opposite and look at her.

Photos of the 1973 performance "Rhythm 10" show her hacking away with rhythmic knife jabs between the splayed fingers of her hand. The stabbing sound the knife makes echoes from a loudspeaker. It's scary to watch. 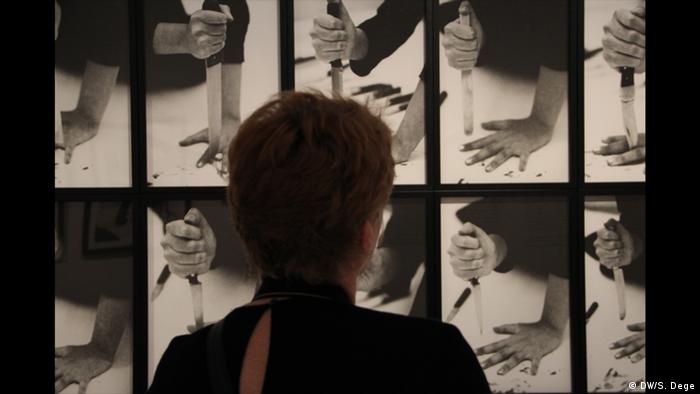 "Rhythm 10": Abramovic darted a sharp knife between her fingers

Abramovic is known for using her art to test her own mental and physical limits. Much of what the 72-year-old artist born in 1946 in Belgrade has acted out is undoubtedly radical, but sensual, too. This can be felt as Marina Abramovic speaks with a soft voice at the press conference on Thursday ahead of the exhibition opening; she peers at her hands, folded demurely in her lap as if in meditation, and largely ignores shallow questions.

"Her works are so significant that it was high time for a major retrospective," says Bundeskunsthalle museum director Rein Wolfs. The retrospective, initially shown in Stockholm, features works from the past 50 years, including early paintings from her years as an art student in Belgrade and Zagreb. Works from her 12-year partnership and artistic cooperation with German artist Ulay alias Frank Uwe Laysiepen are also on show, along with more contemporary pieces.

A highlight of the Abramovic retrospective's program, the Bonn museum will be showing re-performances of her most spectacular works. 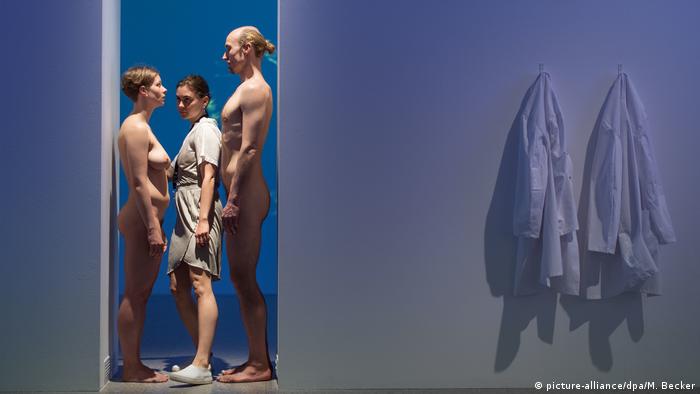 A re-performance of "Imponderabilia": You can't enter the museum without physical contact

Two naked people flank the entrance to a room at the Bonn museum. In the 1977 work "Imponderabilia" performed at the Galleria Comunale d'Arte Moderna in the Italian city of Bologna, Abramovic and Ulay also stood at the entrance to the museum — naked. Visitors had to squeeze past to get in. The public was part of the performance.

That was also the case in her 2002 public living performance, "The house with the Ocean View." There was no privacy; visitors could watch her every single action round the clock over 12 days.

Abramovic's works often focuses on remembrance, pain, loss, endurance and trust. She incorporates her own experience, tearing away the barriers between art and spectators by giving the audience a definitive role in her performances, relentlessly and provocatively.

In a gallery in the Italian city of Naples in 1974, for a work called "Rhythm 0," she set up a table with 72 objects visitors were asked to use, from razor blades to knives and a gun. She sat motionless as some people cut open her shirt. The Bonn exhibition shows excerpts from that performance, startling images that send a shiver down your spine.

At the retrospective, the artist said she sees some of her works as if for the first time. Catharsis, cleansing — recurring topics that take on more than a physical meaning give her work transcendence and complexity.

The reaction it provokes is perhaps a fitting approach to the artist's work: Sometimes her art is disturbing, at times it is amusing. It is always touching and astute — and highly personal. The artist is present, definitely.

Can artists escape the burden of history? This Belgian performance artist has provided a very literal answer. (01.12.2017)

She's renowned throughout the world for her performance art. The 70-year-old artist Marina Abramović has greatly influenced the genre for more than 40 years, easing its way into the world's big art museums. (01.03.2017)