In Turkey, two explosions at separate offices of a pro-Kurdish party have injured several people. The party's predicted success at upcoming elections could have consequences for the ruling administration. 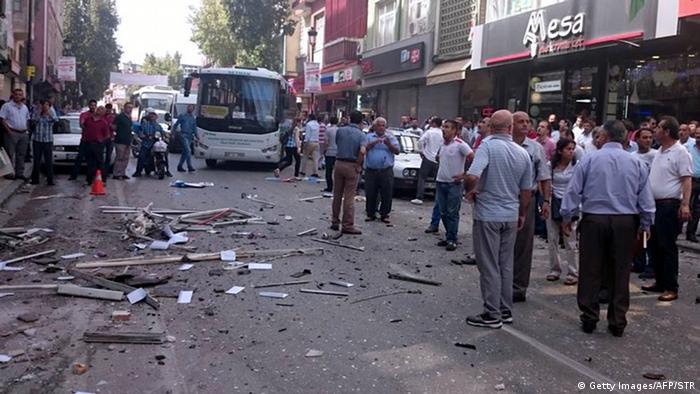 Simultaneous blasts hit two offices of Turkey's pro-Kurdish People's Democratic Party (HDP) on Tuesday. The twin explosions in the southern Turkish cities of Mersin and Seyhan, in the Adana province, wounded at least two, though an HDP official said six people were wounded at the scene of the Seyhan blast.

The Anadolu news agency quoted Mersin's police chief, Rahmi Bastug, as saying that the explosion in his city, the site of the first of the two blasts, occurred in the kitchen of the HDP offices. No one was injured there according to immediate reports.

Turkey is in the midst of an election campaign. Polls suggest that the HDP has a good chance of clearing the 10-percent hurdle needed to join Parliament in the June 7 vote. A win for the HDP would weaken the power of the ruling Islamic-conservative Justice and Development Party (AKP), which seeks to rewrite the constitution in order to give increased powers to former party leader and current President Recep Tayyip Erdogan.

Co-party leader Selahattin Demirtas, who was set to deliver a campaign speech in Mersin on Monday, said that the party's offices have been attacked over 60 times in the run-up to the election.

In April, unidentified assailants began shooting at the HDP headquarters in the Turkish capital Ankara, though no one was hurt.