At least two people have been hurt after an explosion hit the Ukrainian capital. Initial assessments by police suggest it was the work of hooligans. 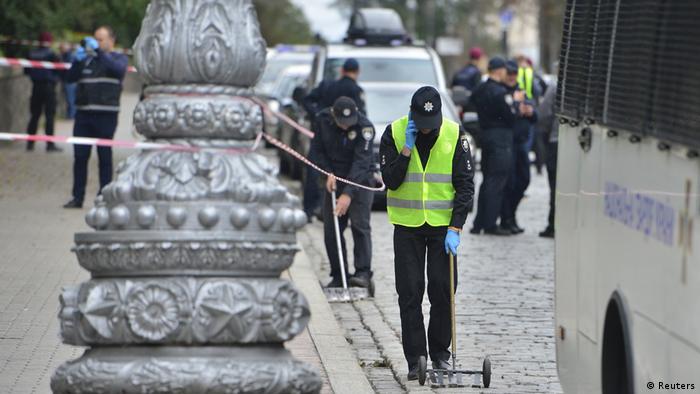 Two people have been injured after an unknown object exploded in the Ukrainian capital, Kyiv, on Thursday, police said.

US Defense Secretary James Mattis and leaders from around Eastern Europe gathered in the city to celebrate the anniversary of Ukraine's independence from the Soviet Union.

The blast happened at 14:06 local time (1106 GMT) near the building of the Ukrainian government, police said in a statement.

"A man and a woman received bodily injuries," police said. Investigators and explosion experts were at the scene on Grushevskogo Street.

Local broadcaster 112.ua aired images of a woman lying on the ground. A Ukrainian internet TV outlet shared video from the scene on social media.

Likely the work of hooligans: police

The two wounded people were taken away and officials cordoned off the area, a correspondent for AFP news agency said.

A spokeswoman for the Ukrainian Security Service told AFP that "so far our first version of the blast is hooliganism."

Witnesses told broadcaster 112 that the explosive device looked like it was thrown from a passing car.

The head of the National Police, Sergei Knyazev, was on the scene.