Exhibition focuses on little-known role of Third World in WWII

What role did the developing world, large parts of which were western colonies, play in World War Two? An exhibition currently showing in Berlin sets out to explore this forgotten aspect of history. 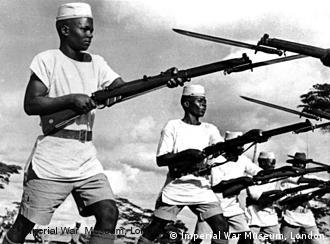 African soldiers were conscripted to fight for Britain

"The next time you go to war, leave us out of it" reads the caption beneath a photograph of an elderly woman in Palau Island, Micronesia.

The image of this frail old woman, fear etched on to her face, lingers in the mind. And with her plea, she could be speaking on behalf of all the victims outside Europe of the fight against fascism. Victims who, until now, have never been properly acknowledged.

"Most books don't mention the millions who died in China," said curator Karl Roessel. As a journalist based in Cologne in the mid-1990s, he and his colleagues began noticing a lack of information on the repercussions of the Second World War in the Third World. To redress this balance, he and a team of freelance journalists embarked on a project that would involve several years of research in thirty different countries.

The group set up an association called "History" and published their findings in various magazines, as well as a book called “Our Victims Don't Count” (Unsere Opfer zaehlen nicht) and a series of teaching materials.

Their latest project is the exhibition that opened in the German capital on September 1 to mark the 70th anniversary of the outbreak of World War Two. 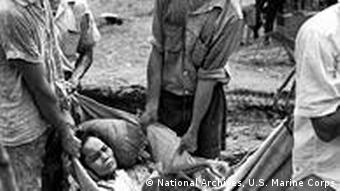 Guam was liberated from the Japanese in 1944

The centerpiece of the exhibition is a large map that serves as a reminder of how many countries were colonies when the war broke out.

Britain ruled the waves, with over a quarter of the world's territories and population under its command. French colonial territory was over twenty times as large as France itself, with 100 million French subjects. The northern Pacific was under Japanese control, while US colonies included the Philippines and a number of militarily significant Pacific islands.

Inevitably, these colonies were dragged into the war against the Axis powers Germany, Italy and Japan. Not only did the colonies supply food for the armies and raw materials for arms production, they also provided auxiliary troops.

Millions of soldiers were recruited - often forcibly - in Africa, Asia and Oceania. India supplied the largest colonial army and therefore also suffered the biggest losses: 60,000 of its 2,5 million soldiers were killed.

The Japanese army, meanwhile, abducted hundreds of thousands of Asian women and put them to work in brothels.

"Today the focus is always on the global perspective," said Karl Roessel. "This should include a global perspective on history. We always refer to the World Wars - and we should realize that this also includes Africa, Asia, Oceania and Latin America."

Their research took Karl Roessel and his colleagues from the History association all over the world in their quest to talk to survivors and historians and track down photographs and documents.

Show dogged by accusations of censorship 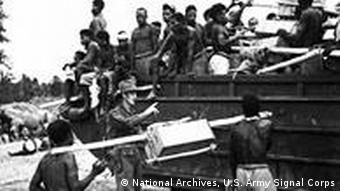 Papua New Guinea was forced to help the war effort

The exhibition's primarily goal is to give a face to these forgotten victims and a voice to eyewitnesses. But nor does it shrink from painting a full picture.

As Roessel explains, the Third World's role in the Second World War was a complex one, and the exhibition also addresses the existence of collaborators with fascism and persecution of Jewish people outside of Germany

The German Wehrmacht had its own Arab and Indian legions made up of prisoners of war who had been persuaded to join the Axis armies, for example, while parts of the exhibition documenting Arab-Nazis collaboration in the Middle East ensured that the show hit the headlines even before it opened.

The show was initially to have been hosted by the Werkstatt der Kulturen in the Berlin district of Neukoelln, home to a large Arab community. But when its director Philippa Ebéné decided to remove panels documenting the alliance between the Grand Mufti of Jerusalem, Hajj Muhammad Amin al-Husseini and Adolf Hitler, it was relocated to the UferHallen gallery in the district of Wedding.

The grand mufti was a key Islamic supporter of Nazi Germany's persecution of Jews.

Roessler told the media that Ebéné's removal of these panels was scandalous "One must, of course, name that al-Husseini, a SS functionary, participated in the Holocaust," he said.

Guenter Piening, Berlin's Commissioner for Integration, defended Ebéné's decision to censor the exhibition, telling daily Der Tagesspiegel that "we need, in a community like Neukoelln, a differentiated presentation of the involvement of the Arab world in the Second World War."

Not All Palestinians Were Pro-Nazi, Says German Historian

Historians have typically characterized Palestinians collectively as Hitler-supporters during the Nazi regime. But a German researcher has said that they were more concerned with relations with an other European country. (08.01.2008)

As the world recalls Nazi Germany's surrender 60 years ago, Germany's media mainly focuses on European events. But some journalists are doing their best to draw attention to developing countries' roles in World War II. (07.05.2005)

Hitler, Bose and a Common Enemy

Subhas Chandra Bose, who raised an army in exile to fight the British, is revered as a freedom-fighter and patriotic icon in India. So why was Indian director Shyam Benegal shooting a film on Bose’s life in Germany? (11.08.2003)