Paul Manafort had his bail revoked over allegations of witness tampering. At the same time, US President Donald Trump tried to downplay the significance of his relationship to Manafort. 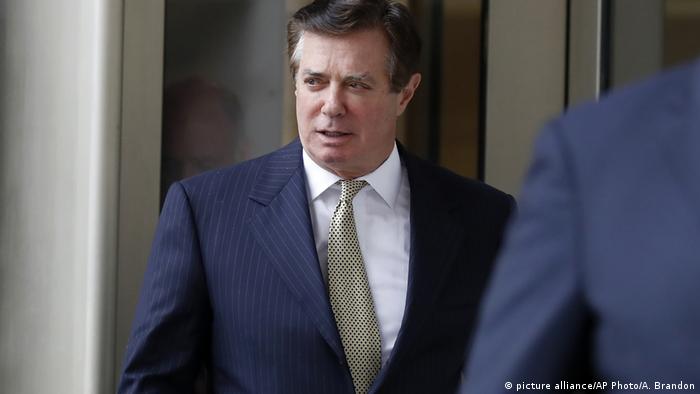 The former campaign manager for US President Donald Trump became the first former member of the Trump camp to be sent to jail on Friday after a federal judge revoked his bail.

The 69-year-old Paul Manafort was reportedly engaging in attempted witness tampering while under house arrest awaiting his trial.

"You have abused the trust placed in you six months ago," Judge Amy Berman Jackson was quoted by the Washington Post as saying. "The government motion will be granted and the defendant will be detained."

Manafort was indicted last October as part of special counsel Robert Mueller's investigation into collusion between the Trump campaign and Russian agents. Manafort is accused of money laundering, as well as tax and bank fraud charges.

The charges revolve around Manafort's work for pro-Russian politicians in Ukraine between 2004 and 2014, including for deposed President Viktor Yanukovych.

While under house arrest, Manafort allegedly tried to use his former Russian fixer, Konstantin Kilimnik, to contact two witnesses in his money laundering case and persuade them not to make certain statements to investigators.

In response to the news, President Trump tried to downplay his ties to Manafort.

"Paul Manafort worked for me for a very short period of time," the president told reporters. "He worked for me, what, for 49 days or something?"

Manafort is one of 20 people and three companies to be indicted by the Mueller investigation thus far. He has pled not guilty to the charges.

A Dutch lawyer with knowledge of contact between a Russian official and Donald Trump's campaign staff has been jailed for 30 days. It marks the first sentence in special counsel Robert's Mueller's Russia investigation. (04.04.2018)

#MeToo movement takes off in Greece 45m ago