Ex-Iraqi soldier on trial in Berlin for war crimes

Rami K. has been accused by German prosecutors of war crimes after he posed for photos while holding up the decapitated heads of two "Islamic State" fighters. The ex-Iraqi soldier came to Germany as a migrant in 2015. 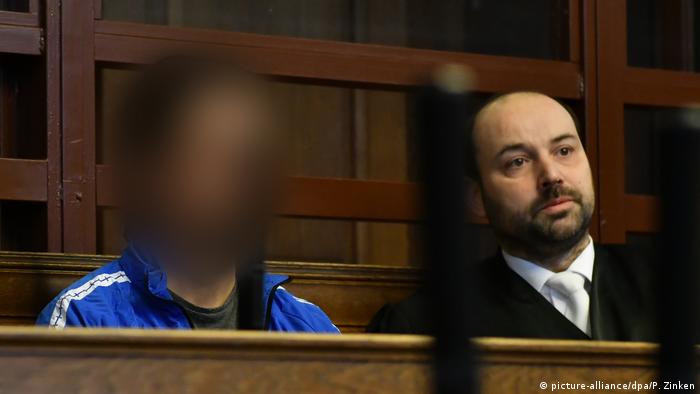 Rami K. (face blurred) sits next to his lawyer in the Berlin courtroom

An Iraqi ex-soldier on Wednesday appeared before a Berlin court charged with war crimes.

Rami K. is accused of posing for photographs with the decapitated heads of two fighters from the so-called "Islamic State" (IS), before sharing the images online.

Amnesty: 'The world in 2016 became a darker place'

A new report by Amnesty International highlights 2016 as an awful year for human rights, with war crimes committed across the world, refugees being scapegoated and global powers failing to rise to the challenge. (22.02.2017)

The 28-year-old came to Germany seeking refuge in 2015, the same year hundreds of thousands of Iraqis, Syrians and others did the same. He lived in the capital before being arrested last August.

The photos are believed to have been taken in March of 2015, while he was fighting in the Iraqi army against IS near the town of Tikrit, north of Baghdad.

K. has defended himself before the court, saying he was ordered by his superiors to pose with the heads. He told judges, via an interpreter, that "had I disobeyed the order, the punishment would have been execution."

Judges were showed the image of the accused in uniform with his arms outstretched, holding a head by the hair in each hand.

"I didn't feel comfortable in my skin," K. said. "I always had the feeling that it was wrong." He went to tell the court that after the incident he was unable to eat for a week before he eventually decided to quit the military.

Police came across the photo on his Facebook profile in July 2016, after they confiscated his tablet as part of a separate charge against the 28-year-old. He was arrested the following month after prosecutors ruled that the photographs mocked and degraded the dead and was therefore liable for two counts of war crimes.

If found guilty, K. faces between 18 months and two years in prison. Three further hearings are scheduled before March 2, after which the court is expected to reach a decision.