A German court has decided not to pursue a tax evasion case against three former DFB officials, including two former DFB presidents. They have been charged in connection with the awarding of the 2006 World Cup. 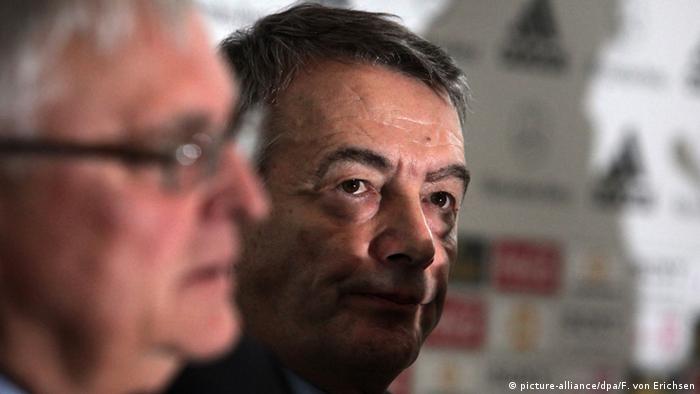 A regional court in the German city of Frankfurt on Monday decided not to open proceedings against three former high-ranking members Germany's football association (DFB).

The three officials — former DFB presidents Wolfgang Niersbach and Theo Zwanziger and former general secretary Horst Schmidt — were charged in May with tax evasion in connection with the awarding of the 2006 World Cup. All three were members of the organizing committee for Germany's successful bid to host the tournament.

The Frankfurt district court ruled that there were insufficient grounds to proceed to a trial. Public prosecutors have one week to appeal the decision to the high district court.

"I have always stressed that the accusations against me are completely unfounded. Now I am just very relieved," Niersbach, who stepped down as DFB president in November 2015, told German news agency SID.

The charges against them relate to a payment of €6.7 million ($7.3 million) which the DFB made to FIFA, world football's governing body, in 2005. The payment was declared as a contribution for a cultural event at the World Cup in Germany, but the event never took place.

Public prosecutors maintain the payment was wrongly declared in the DFB's 2006 tax return, but the football association continues to insist that it was made for operational reasons.

Investigators also believe the money was actually a concealed repayment to the late chief executive of Adidas, Robert Louis-Dreyfus.

Three years earlier, Louis-Dreyfus had extended a loan of 10 million Swiss francs to Franz Beckenbauer, then the president of the World Cup organizing committee. Around the same time, a similar sum was transferred from an account belonging to Beckenbauer and his manager to a company in Qatar belonging to Mohamed Bin Hammam, then a FIFA executive.

A case involving then-FIFA General Secretary Urs Linsi was also rejected Monday by the court. He has been charged with aiding and abetting the crime.

Reinhard Grindel's future as DFB president: Hanging by a thread

Many believe that Germany must win the bid to host the 2024 European Championship if DFB President Reinhard Grindel is to carry on in the post long term. His current mandate only runs until September 2019 (27.09.2018)