Even absent, Erdogan leaves his mark on AKP congress | Europe | News and current affairs from around the continent | DW | 13.09.2015

Even absent, Erdogan leaves his mark on AKP congress

The Justice and Development Party has wrapped up its 2015 congress. Turkish President Recep Tayyip Erdogan was not present for the first time since founding the AKP in 2001. However, his influence was everywhere. 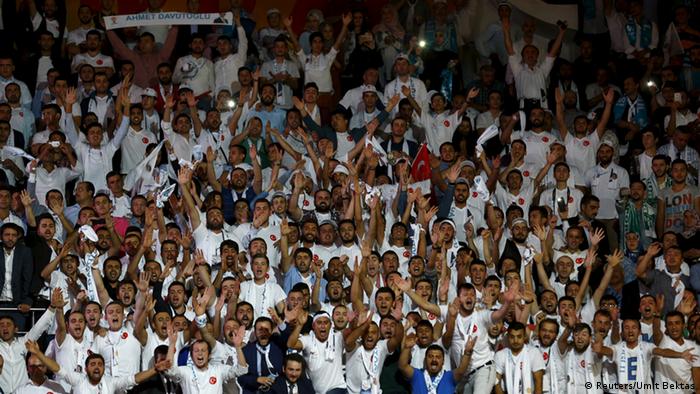 Turkey's Justice and Development Party (AKP), which was unable to win majority in the June 7 elections, has concluded its fifth general congress in Ankara. The congress was held under the shadow of the speculations that there was a disagreement between Prime Minister Ahmet Davutoglu and President Recep Tayyip Erdogan regarding the party's executive committees. Yet, Davutoglu, who stood unopposed for chairmanship, was re-elected as the leader of the party. In his speech, he referred to the event as a "reinvigoration congress" in the wake of the AKP's failure to secure a majority in the June elections. However, experts argue that Erdogan, constitutionally barred from party politics in his role as Turkey's president, will continue to exert his influence over the AKP. Davutoglu (right) and Erdogan: one officially leads the party - the other rules it

At the congress some changes regarding the party's platform were announced, and the AKP's main strategies for snap elections on November 1 were presented. Erdogan's influence was clear as the new members of the executive committee were named. It was remarkable that the AKP's highest decision-making body, the Central Decision Executive Board, was filled with Erdogan loyalists. First there was Binali Yildirim, who was rumored to have considered publicly challenging Davutoglu for the chairmanship; Burhan Kuzu, Erdogan's chief adviser on the constitution; and Berat Albayrak, the president's son-in-law. On the other hand, there were no names from the party's accounting wing. Ali Babacan, who is known to be the brain of AKP's financial policies; Cevdet Yilmaz, deputy prime minister in charge of the economy in the temporary Cabinet; and even Finance Minister Mehmet Simsek did not make the list. The fact that there were not any recognizable names that were close to Davutoglu is a further sign of Erdogan's influence.

Abdurrahim Boynukalin, who was also present at an attack on the Turkish daily Hurriyet, was elected to the AKP's high council. Some interpreted this as the AKP's admission of having had a role in the incident.

The party created new executive positions, along with new regulations at the congress; these were the vice presidency for human rights, vice presidency for environment and city planning, and commissioner of political virtue and ethics. In his speech, Davutoglu said the new party officials would begin by preparing for the elections on November 1, implying that the upcoming vote would determine the country's direction. He also stated that the AKP would fight against "corruption, poverty and bans" in the country. Davutoglu also mentioned the framework of the election strategy: "We will allow neither dictatorships nor the pressure and cruelties of the terrorist organizations. We won't divide the people. We are for both public order and democracy. Turks, Kurds, Alawites are all part of the Turkish Republic. We will rebuild morality and complete the judiciary reforms. Civilians won't be hurt while we are conducting operations against PKK (Kurdistan Workers' Party). Constructive reforms will continue to secure economic stability. Legality will be all over Turkey."

Many have questioned whether the AKP was indeed reinvigorated by the congress. "Turkey is heading for a disaster," said Tarhan Erdem, the head of Konda Research and Consultancy, which conducts election surveys. "The only way to avoid this disaster is the elections. If the Turkish people have seen what has been happening, then they will punish the AKP several times over in the elections. The reason for the recent conflicts that Turkey has been experiencing is the AKP - people understand this."

The political scientist Ayse Ayata, of Ankara's Middle East Technical University, said the elevation of the AKP's new executives indicated that Erdogan intended to have a strong influence on November's election - and after. "In the June 7 elections, the Turkish people managed to stop Erdogan," Ayata said. "However, we have seen that it is not enough to stop him. At this point the election strategy of the opposition is more vital than the AKP's." Ayata said it was not possible for the AKP to reinvigorate under Davutoglu: "The election of Erdogan's loyal supporters to the top positions has shown that a message was given to Davutoglu saying, 'If you want to stay in the party, that's the way it's going to be; you don't have any other options.' There is no doubt that the list of parliamentary candidates, which is soon to be announced, will be determined by Erdogan as well. We'll see, along with the November 1 elections, how far it will go with the one man ruling".

Sinan Ulgen, who heads the Istanbul think tank the Center for Economics and Foreign Policy Studies, said the AKP did not present a new strategy. "Davutoglu's words do not matter at all," he said. "It is now proven that there is no institution that could implement his promises. It looks like Turkey will go through the same experiences after the new elections and the AKP will be obliged to form a coalition once again." He added: "As we get closer to the elections, this picture shows that Davutoglu failed to lead the party and that Erdogan has raised his influence. It is clear that the AKP will continue under Erdogan's influence".

Ibrahim Kaboglu, a professor of constitutional law at Istanbul's Marmara University, told DW that the AKP did not get the voters' call for transformation in the June elections. "If the message had been understood, there would have been a democratic attitude," he said. "It was Erdogan who determined that Davutoglu was going to be the prime minister. And now there has been no other candidate oppose to Davutoglu. Delegates vote on a list, which has already been decided. This is way beyond the communist or fascist parties".

Kaboglu also said that, in light of the AKP's poor record on human rights, the newly established position of "vice president for human rights" was meaningless. "An MP who attacked Hurriyet has been elected to the bureau," he said. "This shows that the AKP is not democratic. On the one hand, you award violence; on the other hand, you talk about human rights. This is not acceptable."