If Germany's highest court decides that the EU's Lisbon Treaty, aimed at streamlining decision-making in the 27-member block, is unconstitutional, the disputed EU initiative could potentially be buried once and for all. 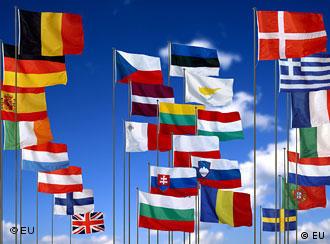 The EU's treaty is currently stalled

The Federal Constitutional Court will from Tuesday, Feb. 10, consider claims that the proposed EU treaty calls into question the basic principles of representative democracy by undermining the power of national parliaments.

The complaint was brought by Peter Gauweiler, a conservative member of the Bundestag and a group of deputies from the Left party.

As part of written evidence submitted to the court, Gauweiler used the example of a German environment minister trying and failing to get a certain type of light bulb banned by the Bundestag.

After failing on the national level, the minister could bring the same initiative to the highest political body in the union, the European Council.

If the council -- consisting of heads of states of government of the union's member states -- decides to lend the proposal its support, a European Commission directive could be drawn up requiring that the light bulb ban be incorporated into German law, despite having been rejected by the national parliament. 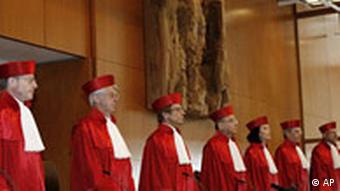 The court ruling will determine whether the treaty goes forward

The legal challenge is a last attempt to stop the treaty, which has already been approved by Germany's parliament and signed by the president. The last step -- handing the documents over to Rome -- has been put on hold pending the court decision.

The court will likely take two or three months to reach a decision. In the mean time, the fate of the treaty will hang in the balance.

The treaty issue is an important one to Chancellor Angela Merkel, who has been a vociferous supporter. The conservative chancellor is up for re-election in the fall. A court decision against the treaty could be a big blow for her politically. The Lisbon Treaty is an attempt by the EU to regroup after a European Constitution was rejected by voters in France and the Netherlands in 2005.

The reform treaty needs to be ratified by all 27 EU countries to come into force. While nearly all have signed, it hasn't been easy to get unanimous support. First, the Irish voted down the European Union's Lisbon Treaty in a referendum in June 2008. Poland then said it wouldn't sign the treaty unless Ireland reversed its vote. The Czech government is stalling.

Ireland is set to vote on the document again later this year, after the EU promised concessions on various issues. The Czech parliament has said it will vote on the treaty on Feb. 17, although the country's euroskeptic President Vaclav Klaus has said he will delay signing the treaty as long as possible.

Even if Germany's court throws out the case, a second complaint is pending which could further delay ratification.

The new legal action, filed in January, was brought by Franz Ludwig Graf Stauffenberg, son of would-be Hitler assassin Claus Schenk Graf von Stauffenberg and a former member of the European Parliament, among others. It is over 200 pages long.

French Auto Bailout Blasted as a Threat to European Unity

French President Nicolas Sarkozy has told car companies set to get a 6 billion euro government loan that they should keep jobs in France. That has enraged the Czech Republic, a major producer of French cars. (09.02.2009)

With the economic recession raising fears about Ireland's status in Europe, a new opinion poll shows most Irish people would vote to back the EU's Lisbon Treaty if a second referendum was held this year. (02.02.2009)