There are hopes of a last-minute deal between Greece and its creditors to avert a default. Eurozone leaders were studying Greece's latest reform proposals at an evening meeting in Brussels. 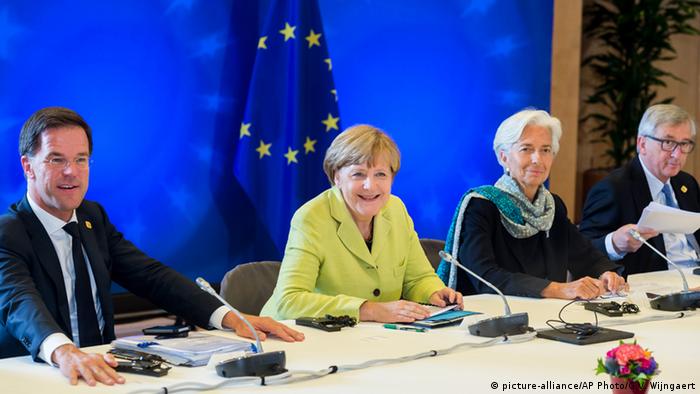 The Greek government presented the new proposals, which include higher taxes, on Monday.

According to Greek media, the new plan includes the abolition of the preferential VAT treatment for Greek islands and an increase in taxes on corporate profits above 500 million euros ($566 million). Greece offered to raise the retirement age gradually to 67 years and to curb early retirement.

Chairman of the Eurogroup of 19 eurozone finance ministers, Jeroen Dijsselbloem, described the new Greek document as comprehensive and "a basis to really restart the talks." But he added that talks in the next days would show whether the numbers added up.

Eurozone leaders arrived for an emergency evening summit in Brussels on Monday voicing guarded optimism that the Greek proposals could lead to a deal this week. An earlier meeting with finance ministers on Monday had failed to come to an agreement.

Greece has to repay the International Monetary Fund 1.6 billion euros ($1.8 billion) by June 30 or be declared in default. This could trigger a bank run and capital controls.

"We will work very hard in the next few days - the institutions with the Greek government - to get that deal this week," Dijsselbloem said. He said the the finance ministers could not make a decision until Greece ironed out details with its creditors: the European Commission, the European Central Bank (ECB) and the International Monetary Fund (IMF).

European Council President Donald Tusk called for an end to the "blame game" between Athens' left-wing Syriza government and its creditors. Germany refuses to keep funding Greece without being sure that its public finances are sustainable.

Arriving for Monday's evening meeting in Brussels, Chancellor Angela Merkel was guarded in her response to the new offer. "After the Eurogroup meeting there is no basis for a decision, so this can only be a consultative summit," she said.

French President Francois Hollande said: "I hope the work conducted in the past few days by Greece and the institutions lays the foundation for an agreement that should be reached as soon as possible."

US Treasury Secretary Jack Lew urged Greek Prime Minister Alexis Tsipras in a phone call to make a "serious move" towards a deal with creditors to avert "immediate hardship for Greece and uncertainties for Europe and the global economy."

Financial markets reacted well to the news with the Greek stock market closing up 9 percent on Monday. The Frankfurt DAX index of leading German shares closed up 3.9 percent and France's CAC 40 was up 4.1 percent on the day.

The costs of borrowing for Italy, Spain and Portugal fell sharply on hopes of Greece staying in the eurozone.

There is a two-day European Union summit starting on Thursday in Brussels to take the talks forward and try to reach a deal that will keep Greece solvent.

Thousands of people rallied in front of the Athens parliament on Monday in support of Greece remaining within the eurozone.