In what’s being hailed as an engineering masterpiece, two important German shipping canals have been joined by a giant kilometer-long concrete bathtub. The new waterway near the eastern town of Magdeburg opens Friday. 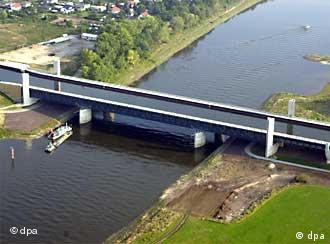 The massive water bridge over the Elbe river cost around €500 million.

Public infrastructure projects are notorious for taking longer than expected, but Germany’s new water bridge tying the Elbe-Havel canal to the important Mittelland canal, which leads to the country’s industrial Ruhr Valley heartland, was over 80 years in the planning.

Engineers first dreamt of joining the two waterways as far back as 1919. Construction to bridge the Elbe river near Magdeburg actually started in the 1930s, but progress was halted during the Second World War in 1942. After the Cold War split Germany the project was shelved indefinitely, but things were put back on track following reunification in 1990.

Taking six years to build and costing around half a billion euros, the massive undertaking will connect Berlin’s inland harbor with the ports along the Rhine river. At the center of the project is Europe’s longest water bridge measuring in just shy of a kilometer at 918 meters. The huge tub to transport ships over the Elbe took 24,000 metric tons of steel and 68,000 cubic meters of concrete to build.

The water bridge will enable river barges to avoid a lengthy and sometimes unreliable passage along the Elbe. Shipping can often come to a halt on the stretch if the river’s water mark falls to unacceptably low levels.

“It’s important to us to make the waterways attractive to industry as a safe and environmentally friendly transportation way,” German Transportation Minister Manfred Stolpe said at the opening ceremony on Friday, according to the Associated Press.

But the project's start wasn't free of mishaps, as one of the new locks near Magdeburg burst on Thursday, eroding part of the bank and street. The damage will not hinder the use of the new passageway, however.

Barge captains will now be able to ship loads of up to 1,350 metric tons – the equivalent of 50 truckloads – over the 34-meter wide and 4.25-meter deep water bridge. Previously, ships could only be loaded with 800 metric tons. 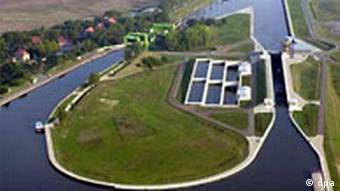 Achim Pohlman, president of the eastern sector of the Federal Waterways Directorate, now expects shipping volumes to increase along the east-west route. Whereas in 2002 around four million tons were moved, some are now forecasting seven million tons of goods by 2015.

Critics, however, remain skeptical that such levels can ever be reached. That has led environmental group BUND to call for ending the further planned canal expansion of the Havel and Spree waterways near Berlin, which would allow larger Rhine barges to travel all the way to the German capital.

“The canalization of Havel and Spree for bigger Rhine boats would have fatal consequences for the natural water supply in Berlin and Brandenburg. Falling water levels would dramatically drain wetlands and Potsdam’s world cultural heritage would be threatened,” BUND said in a statement on Friday.