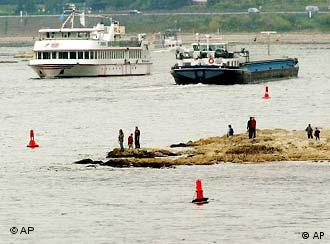 Islands in the stream: Low waters are making the Rhine difficult to navigate.

With water levels falling to their lowest levels in over 50 years, the Rhine River in Germany is becoming increasingly dangerous to ship and passenger traffic. One week ago, a ship from the popular KD cruise line ran aground near the Lorelei, a popular tourist destination in the Rhine River Valley, injuring dozens. A number of shipping companies have been forced to suspend their operations on the world’s most-heavily trafficked river.

"We’ve got the problem under control," said Andreas Stolte of the Cologne Container Terminal Company (CTS), "but it’s leading to additional work and costs." The situation has gotten so grave that container ships navigating the Rhine can only be filled to a third of their normal capacity; otherwise they risk literally hitting bottom.

For shipping managers like Stolte, that means dispatching more container ships or diverting goods to trains and semi-trucks. And though the company says it isn’t losing money yet as a result of the crisis, "margins that are already very small in the world of transport have shrunk markedly lower."

CTS’s fleet of ships ply the waters back and forth between Cologne to the deep-sea ports of Rotterdam, Antwerp and Zeebrugge, transporting a total of about 300,000 containers a year. Currently, most of the low-water problems are concentrated in Germany. Due to its extensive network of inland canals, Holland can better maintain water levels for its domestic shipping traffic. There have still been problems on the Wall River, one of the two Dutch arms of the Rhine.

Leaving cargoes at the dock

"In the harbors, a good deal of the cargo is being left behind because we can’t completely load the ships," said Antoon Roos, who heads the association of inland water transport employers.

Many shipping and logistics companies in Holland are now turning to trucks and freight trains to transport their goods to Germany. Roos noted, for example, that German engineering giant Thyssen-Krupp in the western German city of Duisburg, has successfully maintained its supplies of ore from abroad despite the steep decline in Rhine ship traffic. Roos said no jobs were currently threatened by the crisis, but it has had other implications. "The costs for the loaders and shipping agents are increasing, but the inland shipping companies are still okay," he said. 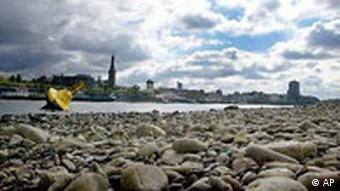 In Germany, industry observers say it is still to early to determine the exact amount of damage the disappearing waters have caused for shippers. According the the German Association of Inland Water Transport, shipping companies at the beginning of the summer were unperturbed by the lower-than-usual waters because they were able to charge supplements for shipping in low-water conditions. Even though that surcharge has now reached 100 percent, it is still not enough for the companies to cover their losses, since they can’t carry as much freight.

For companies that travel long distances along the river – which is navigable from Basel, Switzerland, to Rotterdam, the Netherlands – the situation has grown economically precarious. Some companies, including the Mainz-based Frankenbach Shipping Company have temporarily moored their fleets.

In Holland, the Danser Container Line said it is still operating ships as far as Strasbourg, France, and Basel, but the company is only able to fill its ships to 20 percent of their normal capacity. "There are enormous problems," said the company’s director, Ben Maelissa.

At the outset of the crisis, the company began renting additional ships from partners and colleagues. But as river levels fell further, that became an increasingly difficult propositions, since many ships were already too heavy to traverse the low waters – even empty. But Maelissa said that, through a combination of using trains and trucks, his company has been able to continue serving all of its customers.

Stretches of rivers closed to ships 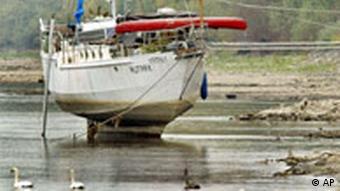 A stranded boat in Mainz, Germany.

The problems haven’t been restricted to the Rhine. The Weser, Elbe and Oder rivers have also closed some stretches to shipping traffic. "That’s not unusual on the Elbe or Oder," said Silke Rademacher of the German Federal Institute of Hydrology in Koblenz, "there, water levers are always low in summer." Czech and Polish inland shipping companies are currently experiencing similar woes, she pointed out.

After a record dry summer in Germany, it’s impossible to predict how long the crisis will continue. Rain can lead to an increase in the water level, but only incrementally. But Rademacher said it would likely be weeks before shipping can be fully resumed on Germany’s major shipping lanes. And things could get worse before they get better – the Rhine River generally reaches its lowest levels at the end of October or in November.

Tourist Ship Runs Aground on Rhine

Fifty people aboard a German tourist ship were injured on Sunday when the ship ran aground near the legendary Loreley cliff, south of Koblenz. (Sept. 30, 2003)