Towns in Germany and the Netherlands are beginning to remove road signs in the hope of decongesting roads and making travel a less confusing experience. 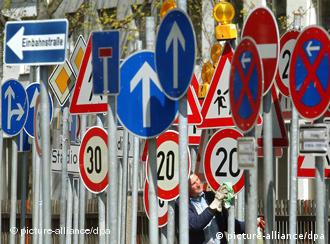 Do they make roads safer or more dangerous?

Imagine what it would be like traveling around towns without street signs. Would people move around carefully, looking out for each other or would chaos break out?

In the Netherlands, transport planner Hans Monderman has pioneered a new method which involves removing traffic signs, lights and in some cases, road markings.

This concept has successfully been tested in the small Dutch town of Drachten, which has had traffic lights removed. Other changes included the installation of a children's playground in the middle of one of the roads to force drivers to slow down. 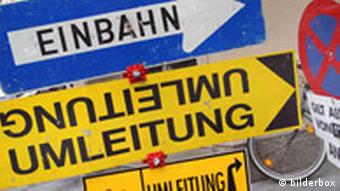 Who can keep track of what to do here?

Monderman said that the initial purpose of traffic lights was good and traffic was made safer, ''but created a new problem because traffic no longer flows.''

A number of European cities have begun to successfully implement the system developed by Monderman, which reportedly has decreased congestion and reduced accidents, according to police statistics.

The German town of Bohmte is among those who have signed up for the new traffic concept from the Netherlands.

The removal of road signs across Germany has been supported by the German transport ministry, where officials argue that the amount of signs is confusing drivers.

"Many road signs are only put up so that we are covered for insurance purposes and not necessarily because they provide the driver with useful information, '' said Jörg Hennerkes from the ministry.

Providing road signs is the responsibility of municipalities, who seem to have no intention to minimize the amount of signs that reportedly appear every 28 meters (30.52 yards) in Germany.

Residents skeptical of the change 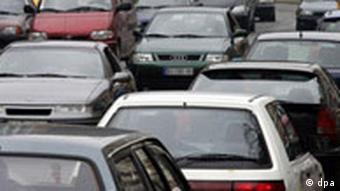 The mayor of Bohmte, Klaus Goedejohann, said that the road restructuring aims ''to give the town back to the people.

"We don't want the cars alone to have precedence, we want to try and make the area pleasant for everybody," he said.

The plan for Bohmte is to have all the traffic lights and road signs removed, and it's attracted some skepticism from residents.

More than 12,000 vehicles, including large numbers of trucks, pass through the narrow streets in the town center daily and pedestrians have virtually disappeared from the streets.

"Many people still don't believe that it can work in practice,'' Goedejohann said. ''You just can't imagine with busy roads that suddenly everything will change and the cars will actually slow down and show more consideration."

But local officials in Bohmte insist they plan to remove every traffic light and road sign from the town center over the next two years. 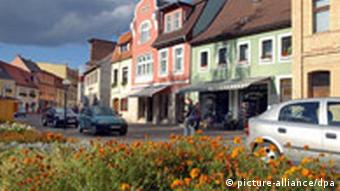 The way of the future?

Transport planner Monderman, said the city centers become more eroded by traffic: public spaces used in the past for meeting and socializing are today dominated by traffic.

In Drachten, Monderman has designed an intersection without road markings, traffic lights or signs, which -- according to the transport planner -- makes the road more dangerous in order to make them safer.

He survived the fall of communism, but the trials and tribulations of the traffic-light man from former East Germany are far from over. (Feb. 1, 2006)

A Dutch town near Germany wants to quell booming soft-drug tourism by creating a strip especially for smokers -- outside city limits. (Jan. 17, 2006)

Although Germany might be lagging a little on the international research and development stage, when it comes to the evolution of the automobile, the nation is keen to be in pole position. (March 1, 2006)