European Muslims can do better, says leading Islamic scholar | Europe | News and current affairs from around the continent | DW | 26.01.2011

One of Time Magazine's 100 most influential thinkers of the 21st century, Tariq Ramadan says Islam in Europe needs to be redefined. With Islamophobia passing the dinner-table test, his message is more urgent than ever. 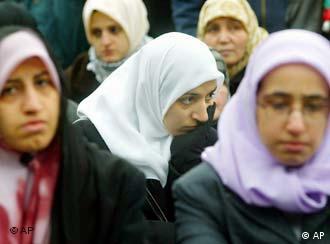 Studies show Germans think Islam is gaining too much ground

According to a recent study carried out at the University of Leipzig, more than a third of Germans believe Germany would be better off without Islam. Last week Europe's foremost Muslim thinker, Tariq Ramadan, spoke to a captive audience in Berlin about the tide of Islamophobia sweeping Europe and his own vision of a "shared pluralism." A professor of Islamic Studies at Oxford University, Ramadan is also president of the European Muslim Network. He is a polarizing figure, seen by some as the "Muslim Martin Luther" and by others as a master of doublespeak. He spoke to Deutsche Welle about western perceptions of Islam today and the need for Muslims to become full partners in democratic societies.

Islamophobia and rejection of Muslims is everywhere in Europe today, and Germany is no exception. It is a two-way process. We have to change our way of talking about Islam, our way of creating and building the 'Other.' To this end, it's important to work on education and a better understanding of what Germany and Europe is today and to accept that Islam is a European religion, because we have millions of citizens who are French, British, German and Muslim. But Muslims as citizens have to be more vocal and assertive by explaining their religion and the way they deal with it in their daily lives, so that it is not only perceived as a problem but as a gift and a positive presence.

They also need to avoid the victim mentality that might be nurtured by this atmosphere and to avoid identifying as a minority, saying: we don't want to be targeted, so we will isolate ourselves. No, they should do the opposite, even though to withdraw from being visible would be a natural psychological reaction.

In your book "What I Believe," you say that the debate about integration borders on the obsessive and that what we need now is a 'post-integration' approach based on contribution.

We need to stop referring to integration. By 'post-integration,' I mean that we need to come to an understanding that the success of integration is to stop talking about it. If we keep on repeating year after year, generation after generation, that 'they' need to integrate, we imply that there is a host country, and they are its immigrants. It's over! Muslims are not immigrants in Germany. They are German, they are European.

We have to be visible and vocal not only in the religious field but everywhere. Our contribution can be philosophical, artistic, and as I advocate in my book, creative! To be a Muslim isn't just to say: Islam is not violent, it is not discriminatory - no, it's more than that. It is architecture, books, imagination, ethics. And the more you give to society, the less you will be perceived as a negative factor.

What [controversial German author] Thilo Sarazzin basically said was: look at these Muslims, they are a problem and they are lowering our level of intelligence. He is wrong, of course, and this was a racist stand. But the only way to answer it is to point to contribution. The only right answer is practical: we have to be witnesses of the potentialities we have in our societies to express ourselves in a positive way.

But when you have public and institutional hostility to Muslims, it restricts the scope of their participation in social, economic, political and cultural life. How can we break this deadlock?

When I come to Germany and other European countries I can see that, yes, there is a trend to Islamophobia, racism and a rejection of Muslims, but lots of people are not happy about it and know there's something wrong.

So you are right, a fracture within society is possible. But what I see behind the scenes at the local level are a lot of Europeans willing to listen. This should be the driving force of change: not Muslims on their own, but Germans from different backgrounds sharing the same principle: we are not going to allow racism to return to this country in a way that is very, very damaging for all citizens. 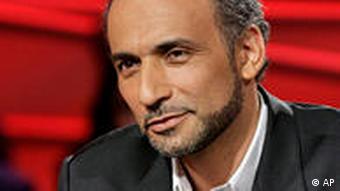 Ramadan says European Muslims need to be visible and vocal

According to the surveys, what Germans are most bothered by is the way they see women treated in Islam: You believe that a woman can find liberation in Islam, that Islam was originally a feminist religion. Germans see it as patriarchal and oppressive in its practice. How do you explain this gulf?

Because both are right. When you study the scriptural sources then you understand that there is a message of equality and liberation. But when you look at what Muslims are doing, Germans are not completely wrong to see a problem. In Muslim communities, I can see myself that there is a lot of discrimination; women are not involved in education, the mosque, not always respected as human beings and within marriages. There is a problem. I constantly repeat: Islam has no problem with women, but Muslims do. This is why I train Muslim women in the way they deal with the scriptural sources and they way they deal with the community.

The missing discourse in Islam is about women: not as mother, not as daughter, not as sister, but woman as woman. What does spiritual liberation of the being mean? What do we mean by femininity and liberation? As a woman, I don't want to be reduced to my body but you have to accept that I have a heart, I have a soul.

But our fellow citizens also have a responsibility not to essentialize the Islamic discourse and say: all Muslims are like this or this. There are very practicing Muslim women liberating themselves from cultural oppression and literalist understandings.

Germany's top-selling non-fiction bestseller is a book that attacks Islam - and the German president can't get the public to agree with him when he says that Islam is part of Germany. (20.10.2010)