European and Chinese steelmakers are heading towards a dispute over price dumping after the Europeans accused their rivals from Asia of exporting at prices below production cost. 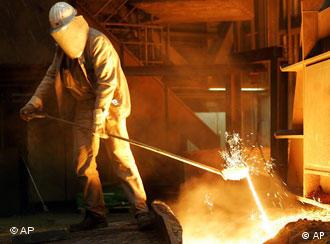 The Europeans, meeting with their Chinese competitors at a conference in Berlin on Monday, Oct 8, also threatened to register an official anti-dumping complaint with the European Commission.

"Complaints like this are always the last resort when all the political measures have been exhausted," Dieter Ameling, President of the German Steel Federation, said. 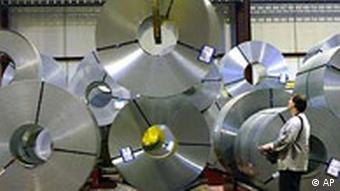 German steel firms feel their product is being under cut

"It is a situation of state-run production, while in the rest of the world steel is produced by private companies designed to create value," said Karl-Ulrich Koehler, the head of Germany's ThyssenKrupp Steel, the world's tenth-biggest producer.

Ameling said that "instead of exporting the steel that is produced in China at great cost to the environment, it would be better if the Chinese withdrew their polluting products from the market."

Zhang Xiaogang, chairman of the China Iron and Steel Association, responded by telling the conference that inefficient steel mills would be closed by the end of the decade in a move towards consolidation.

"By 2010, the iron and steel enterprises will be decreased greatly in number and production by the top 10 enterprise groups in the country will make up over 50 percent of gross crude steel production in China," he said.

Demand for steel expected to increase 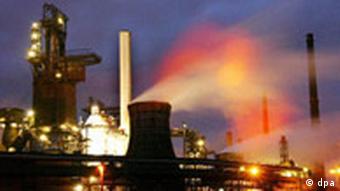 China's economy will be one of those driving steel demand

The International Iron and Steel Institute (IISI), which is hosting the conference, said in its latest forecast on Monday that global demand for steel will keep growing next year in response to strong economies in China, Africa and the Middle East.

IISI expected steel demand to grow by 6.8 percent this year and by around the same level in 2008, slightly more than a forecast earlier this year.

After a string of product recalls by US toy giant Mattel of China-made items this summer, the EU Commissioner for Consumer Protection Meglena Kuneva called for new quality standard marks and cooperation with the US. (06.10.2007)

The European Union said Tuesday accusing China of not doing enough to encourage free trade, saying trade needed to be a "two-way street" and warning of a possible backlash if trade isn't opened. (24.10.2006)

EU Tells China Not to Step on its Toes

The EU has again taken up the import fight against China by placing a tariff on leather shoes. The surcharge, to be phased in gradually, has not found favor in China, but Europeans are also unhappy. (08.04.2006)

Do the Europeans have a point or are they just reacting to the threat of increased competition from China? Please include your full name and country with any reply.