Stocks and oil prices have steadied and even bounced back after "Black Monday" that saw them fall by almost a third in value. Coronavirus and fuel prices had been blamed for the slump. 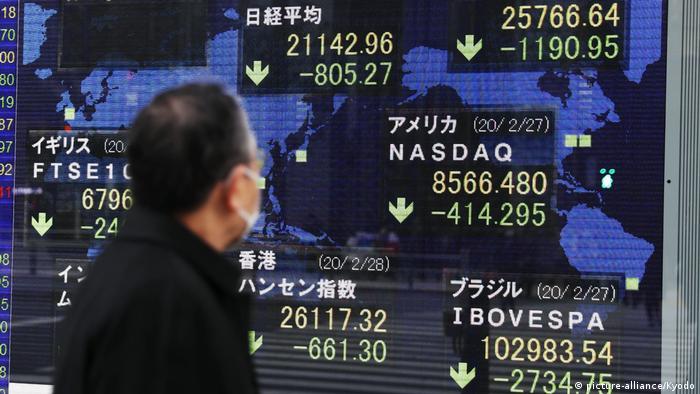 Europe's main stock markets bounced back on Tuesday, just a day after suffering their biggest losses in more than a decade due to plummeting oil prices and fears over the coronavirus outbreak across the continent.

The collapse of the OPEC+ alliance, aligned with the increase in COVID-19 cases, were both cited as factors behind the global financial insecurity.

On London's FTSE 100 index of major blue-chip companies, prices increased by 3.1%, assisted by a modest recovery in oil prices, which had initially slipped after a Saudi decision to boost oil output in an already over-supplied market.

The FTSE MIB in Milan, which lies at the financial center of the worst-hit area for coronavirus infections in Europe, recorded an increase of 3.0% Tuesday after plummeting more than 11% the previous day, as the Italian government unveiled more drastic measures to halt the outbreak.

The global outlook was not all positive on Tuesday morning, though, as Russia reported the RTS stock index had slumped more than 10% at its opening after Monday's collapse in oil prices that saw the ruble reach a four-year low.

On what is being referred to as "Black Monday," oil prices dropped a massive 30%, because of the enormous losses that the world stock markets faced that day.

With the Dow Jones Index losing over 2,000 points, an emergency break in early trade was called to control panic selling.

However, oil prices jumped over 6% to come back from its previously precarious position on Tuesday. Japan's Nikkei index opened 3% lower early Tuesday but made some gains in the early hours to settle closer to 1.5% lower.

After falling 6.5%, the South Korean markets stabilized on Tuesday and were down 0.4%. Similarly, Australia's ASX started the day being 4% lower but had pared its losses to under one percent as the day progressed.

Amid panic in the markets over COVID-19, US President Donald Trump announced Monday that he would ask Congress to put together measures like payroll tax relief to calm fears after the dollar incurred huge losses against the euro, the yen and the Swiss franc.

Saudi Arabia has raised the specter of an oil price war aimed at Russia. Moscow refused to comply with OPEC efforts to stabilize the oil markets, reeling from the economic fallout of the coronavirus outbreak. (09.03.2020)

To avoid overload and infection, doctors in Germany are now allowed to grant sick leave to patients over the phone. This applies to patients suspected of having COVID-19, but also to those suffering from a cold. (10.03.2020)

Coronavirus in sub-Saharan Africa: A week in review

As the region faced up to the COVID-19 outbreak and more than a dozen confirmed cases, it marked a milestone in the second-worst Ebola epidemic ever and battled the world's worst measles epidemic as well. (09.03.2020)