The European Space Agency has launched two powerful new flagship telescopes to study space and time in more detail than in the past and give scientists a better and clearer window on the universe. 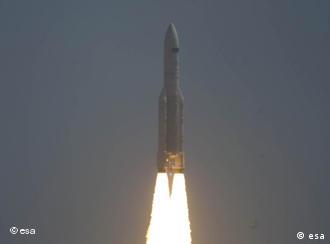 The Ariane 5 rocket will carry Herschel and Planck some 1.5 million kilometers from Earth

An Ariane 5 rocket carrying the two observatories, Herschel and Planck, blasted off from the European Space Agency's (ESA) launch centre in French Guiana. It was to take them out to a position some 1.5 million kilometers from Earth, giving the astronomical instruments an ideal station from which to view the universe.

The Herschel and Planck launch comes during the International Year of Astronomy, a busy year for ESA, and is worth around 1.9 billion euros ($2.6 billion).

In addition to the two observatories, ESA is also set to launch three satellites this year that will acquire key data about ice, gravity and soils on Earth. 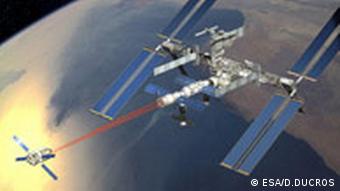 ESA scored a major success last year when it flew its space freighter, ATV to the ISS platform for the first time

"Herschel and Planck are part of the new generation of astronomical observations. We started off close to the Earth and we've gradually moved further away; but in the future, most observatories will be in deep space," David Southwood, director of science at ESA told the BBC last month.

"This allows you to control better the conditions under which the telescopes operate," he said.

Observing the cosmos at far-infrared wavelengths

The two telescopes, part of a joint ESA program that has taken more than a decade to develop, are on very different cosmic missions.

Herschel, the bigger of the two, at 7.5 meters in height, is a far-infrared and sub-millimeter telescope which carries a giant tank of super-fluid helium to cool its instruments. It's designed to study how stars and galaxies are formed and how they evolve.

Goran Pilbratt, project scientist for Herschel at the European Space Agency in Noordwijk in the Netherlands, told Deutsche Welle that ESA was expecting Herschel to provide a fairly clear picture of the origins of the universe.

"How the galaxies were formed, how they evolve over cosmic history, and we will be able to see back in time to perhaps a couple of billion years after the Big Bang," Pilbratt said.

The advantage of infrared is that it can observe things happening in the universe that are hidden to those who can only see in visible light.

Experts point out that space is made of clouds of gas and dust so thick that ordinary light can't penetrate them.

"We can actually see the emission from this cold cloud itself, and from any bodies that may be inside the cloud that you cannot see from the outside because they are emitting through cloud. So we can see stars forming inside a cloud," Pilbratt said.

The other telescope sharing a ride aboard that Ariane 5 rocket, Planck, is to study the cosmic microwave background radiation with unprecedented sensitivity and accuracy. Sometimes referred to as the "first light" in the universe, the CMB carries information about the earliest structures in the cosmos.

It will also help scientists probe the secrets of dark matter and dark energy.

"Dark matter is hypothesized to be a strange kind of substance, it interacts gravitationally with matter and therefore we know it's there, but we don't know exactly what it is," Jan Tauber, project scientist for Planck told Deutsche Welle.

"Dark energy is much more mysterious. We know very little about it, we only know of its existence since a bit more than 10 years and basically we know that something is pushing out the universe to ever increasing speeds at the current time, but we don't know what it is. We are looking for clues.”

There's no way knowing what the celebrated scientists would have made of the sophisticated machinery bearing their names a million and half kilometers from the earth. But they might well have applauded the space-borne telescope as a 21st century response to a primeval urge to climb to the top of a hill for a better view of the night sky.

ESA wants own system to protect satellites From Space Junk

The European Space Agency (ESA) said it hoped to set up its own detection system for space junk instead of relying on US radar to track the chunks of shattered satellites and spent rockets in earth orbit. (17.02.2009)

India shoots for the Moon with German technology aboard

Instruments developed by scientists in Germany will play a vital part in the scientific success of India's first mission to the Moon. The launch is part of a deepening relationship between the two countries. (22.10.2008)

The first pictures from NASA's James Webb Telescope have been made public. They are the deepest images of the Universe ever made.