ESA Wants Own System to Protect Satellites From Space Junk | Europe| News and current affairs from around the continent | DW | 17.02.2009

ESA Wants Own System to Protect Satellites From Space Junk

The European Space Agency (ESA) said it hoped to set up its own detection system for space junk instead of relying on US radar to track the chunks of shattered satellites and spent rockets in earth orbit. 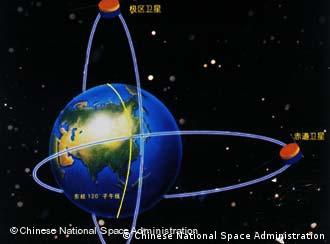 After a US satellite accidentally hit an out-of-commission Russian satellite, scattering a trail of debris in space last week, the European Space Agency said Monday, Feb. 16, it wanted its own system to protect satellites.

Gaele Winters, who heads ESA's European Space Operations Centre (ESOC) at Darmstadt, said the debris would be a danger to ESA's own satellites in the same orbit. He said ESA need live data so its spacecraft could steer clear of the junk.

Jean-Francois Kaufeler, head of the space junk monitoring department at ESOC, said, "Much more monitoring needs to be done." Experts are to meet March 30 to April 2 in Darmstadt to swap ideas on how.

The US National Aeronautics and Space Administration (NASA) tracks about 13,000 objects in orbit, but ESA estimates hundreds of thousands of distinct items are in orbit. A fragment 1 centimeter across could knock out a satellite if it hit it at speed.

After two satellites crashed in space, the EU called for a European code of conduct for civil and military activities in space. It seems unlikely that collision debris will endanger the International Space Station. (12.02.2009)

It's a leftover relic from a time when two powerful nations raced one another into the stratosphere: a nuclear powered Soviet satellite. It’s breaking up in space, though experts are confident it poses no risk. (26.01.2009)