Europe holds its breath as Italy votes in critical referendum

Italy has gone to the polls to decide whether or not to fundamentally alter the structure of its government. The vote is being watched across the EU and in financial markets. 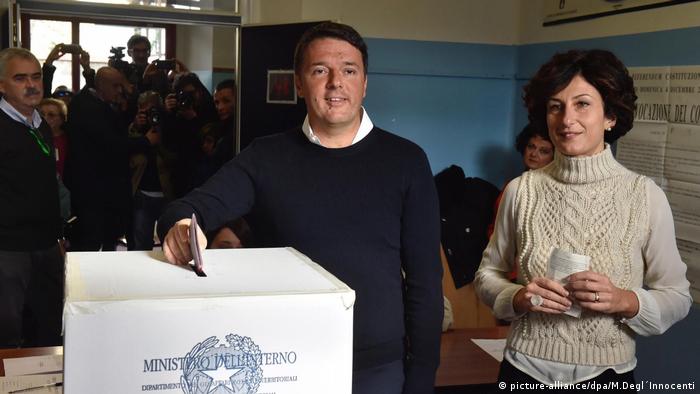 Prime Minister Matteo Renzi staked his career on the constitutional referendum on Sunday, vowing to resign if voters shoot down the measure.

Supporters of the constitutional changes argue the changes would end gridlock in parliament and strengthen the powers of the executive. A "Yes" vote would give Renzi both the mandate and means to pursue reforms his center-left Democratic Party and junior coalition partners say are necessary to unleash Italy's economic potential and streamline government.

European capitals and global financial markets are closely watching the vote in the EU's fourth largest economy. A rejection of the ballot measure may send Italy into a period of political and economic uncertainty that could reverberate across the EU. It comes as Austria holds a presidential vote that could see for the first time since World War II a far-right populist become a European head of state.

In a worst case scenario, a rejection could set the stage for a political crisis and loss of confidence in Italy and its debt-ridden banks, triggering broader problems within the eurozone. While nervous, markets appear to have already factored in potential instability.

Referendum in Italy: The most important questions

In the event of a "No" vote, most observers say an early election is possible but unlikely before late-2017. Instead, Renzi's center-left Democratic Party would probably continue to rule with a new premier.

By promising to step down, Renzi has conflated the constitutional question with support for himself and his Democratic Party, leading many to speculate that a "No" vote may prevail as a protest against the premier and the establishment. The premier in turn has repeatedly sought to make the referendum about reforms, rather than "whether you like Matteo Renzi's face or not."

The last poll two weeks ago before a pre-vote polling ban signaled opposition to the changes had a 5-8 percentage points lead. But with a quarter of the electorate undecided and Renzi relying on a strong expat voter turnout, the outcome is uncertain.

The main opposition parties, populist 5 Star Movement, Silvio Berlusconi's Forza Italia and the far-right Northern League, argue the constitutional changes will erode democratic checks and balances. They are joined by some disgruntled members of the Democratic Party, many constitutional experts and voters who simply do not like Renzi.

A rejection of the constitutional changes would be a boost to the eurosceptic 5 Star Movement at a time the wind of populism is blowing across the continent in the wake of British voters' decision to leave the EU and Donald Trump's victory in the United States.

The constitutional changes would turn Italy's Senate into a body of 100 members chosen mostly from regions, compared to its form of 315 directly-elected and five lifetime lawmakers. The Senate would also lose many of its powers to block and revise legislation.

Another change would transfer some powers from the regions to the central government, making it easier for large infrastructure projects to get approved. The changes would also abolish at costly government policy agency in Rome. In all, the reforms would amend 47 out of 139 articles in the constitution.

All four attempts to revise the constitution over the past three decades have failed, most recently a reform package backed by former premier Berlusconi in 2006.

Polls were due to close at 11 p.m. local time (2200 UTC), with final results from the vote expected on Monday.

Italian Prime Minister Matteo Renzi appealed to citizens to support a referendum to change the nation's constitution. Renzi vowed to resign if the referendum is not approved. (03.12.2016)