Europe Concerned by Rising Violence Over Mohammed Cartoons | Europe| News and current affairs from around the continent | DW | 06.02.2006

Leading politicians have sharply criticized the escalating violence in the Arab world over Danish caricatures of the Prophet Mohammed, even as Muslim leaders are now calling for calm and restraint. 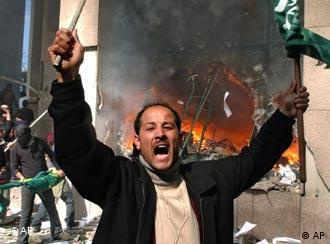 Images of incensed mobs torching Western embassies and institutes in Lebanon, Syria and the Palestinian territories triggered condemnation among leaders in Europe on Sunday.

"I am horrified to see the way violence and attacks are spreading throughout the Middle East," Danish Foreign Minister Per Stig Moeller told reporters hours after Lebanese demonstrators set fire to its embassy there in clashes that left at least 28 people injured. 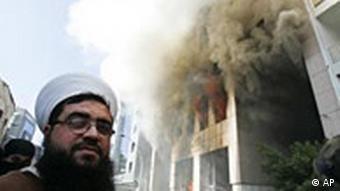 "The actions in Lebanon and Syria yesterday are beyond comprehension and totally unacceptable," he said.

The attacks "can by no means be legitimized and are utterly unacceptable," said Austria, the current holder of the rotating EU presidency.

Merkel said she understood that the Mohammed cartoons had hurt the religious sentiments of Muslims, but said the violent anti-Danish reactions to the cartoons were unacceptable.

German Foreign Minister Frank-Walter Steinmeier said he was following developments with increasing concern and appealed to "all rational forces to counter the false prophet of the culture clash."

Speaking at a meeting in the eastern German city of Dresden along with the presidents of Finland, Italy, Latvia, Austria, Portugal and Hungary, German President Horst Köhler said the events were unacceptable.

"Violence and threats are not acceptable under any circumstances," Köhler said.

The controversy, first sparked by the publication of 12 cartoons depicting the Prophet Mohammed in Danish newspaper Jyllands-Posten last September, has escalated ever since media in Norway, France, Germany, Italy, Spain and several other mostly European countries have reproduced some or all the dozen caricatures.

Muslims and their governments have called the images blasphemous and contrary to Islamic tradition prohibiting depictions of Mohammed. One of the cartoons, showing Mohammed wearing a bomb-shaped turban with a lit fuse, was especially contentious.

European governments have stressed they have no control over media in their countries, and have sided with arguments that freedom of expression outweighs respect for religions in their secular societies.

But the row -- which some observers have called "a clash of civilizations" -- shows no sign of dying down despite widespread calls for calm.

First deaths reported as Afghans come under fire from police

Denmark urged its nationals to leave Lebanon and Syria on the weekend after angry Muslim mobs torched its embassy buildings in both countries.

Nearly 1,000 people also protested in eastern Afghanistan on Sunday and demanded the expulsion of Danish forces based there as part of a NATO deployment. There were no reports of Danish casualties in any of the incidents.

The first fatalities in over a week of protests were reported in Afghanistan on Monday. Three Afghans were killed at a rally in the eastern city of Mihtarlam when police fired on demonstrators after a police station came under attack.

Afghanistan has seen huge demonstrations over the past few days with thousands of people taking to the streets in protest. Hundreds of Muslims protested in Kandahar and Mazar-e-Sharif, while 200 demonstrators gathered outside the Danish embassy in the capital, Kabul.

In protests in the north-eastern province of Takhar, demonstrators threw stones at government buildings and police fired in the air.

In Somalia, a 14-year-old boy was shot dead and several others were injured after protesters attacked the police. 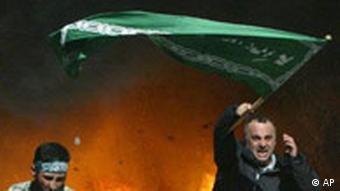 In Beirut on Sunday, thousands of protesters rampaged through the Christian area of Ashrafiyeh, throwing stones, breaking windows and overturning cars. They defied police firing tear gas to storm the Danish embassy building using ladders. There they hacked at walls and windows with axes and poles and set the place ablaze, sending thick smoke billowing into the sky.

Anger was vivid in the Palestinian territories, too. In the West Bank city of Nablus, 20 Palestinian gunmen stormed the French cultural center and spray-painted a cross over its front door with a slogan reading: "Closed until your country apologizes."

Similar action was taken against the German cultural center in Gaza City on Saturday and against EU offices last week.

Leading figures in the Muslim world are now stepping in to call for calm and restraint.

Afghan President Hamid Karzai urged Muslims worldwide to remain peaceful, and added that Muslims should be above violence and not stoop to the same level as those who published the cartoons. Karzai said that the Prophet Mohammed was much too exalted to be insulted by mere cartoons.

The Organization of the Islamic Conference (OIC), a group of 57 Muslim countries, agreed to a meeting with Danish Foreign Minister Per Stig Moeller over the row. The OIC also criticized the attacks on Scandinavian embassies and said it condemned these "regrettable" incidents.

It added that the reactions were "overblown" and "dangerous and hindered efforts to defend the just causes of the Muslim world."

The presidents of seven European countries have condemned the violent protests against the publication in Europe of cartoons of the Prophet Mohammed. (Feb. 6, 2006)