It was an evening of contrasting outcomes for the Bundesliga clubs in the Europa League. Augsburg went through a rollercoaster of emotions as did Schalke - but there was only one goal to be seen in Gelsenkirchen. 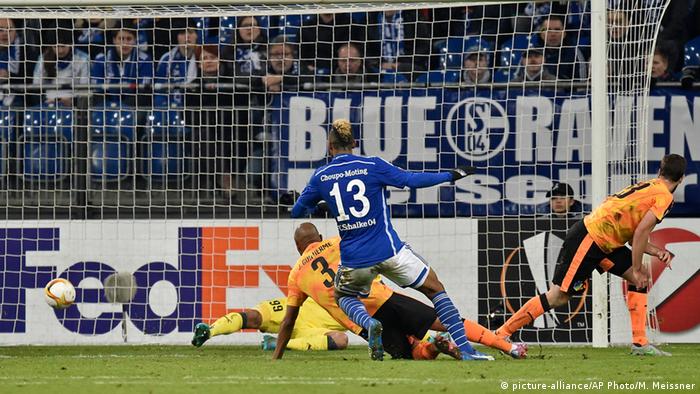 It took nearly the entire game for Schalke to seal their place in the knockout rounds, but despite missing a hatful of first-half chances and a late penalty, Andre Breitenreiter's side eventually secured more European football in 2016.

Against a side they comfortably dispatched in the opening group-stage game, Schalke enjoyed plenty of early possession as hosts of APOEL. Leon Goretzka, Joel Matip and Klaas-Jan Huntelaar all forced headers towards goal, two of which Boy Waterman did well to keep out. Huntelaar was in a particularly predatory mood, but 'The Hunter' never got the chance to feast on a night sparse of goals in Gelsenkirchen.

APOEL nearly took the lead before the break but it would have been undeserved. Schalke had dominated, but were facing an eighth game without a win. Ralf Fährmann made a spectacular save to spare the home side any blushes and after a small dip, Schalke recovered to finally land the decisive blow. Sascha Riether's low cross from the right was angled into the far corner by Eric Maxim Choupo-Moting. Two minutes later, Dennis Aogo saw his spot kick saved after Waterman guessed right, diving low to his left. 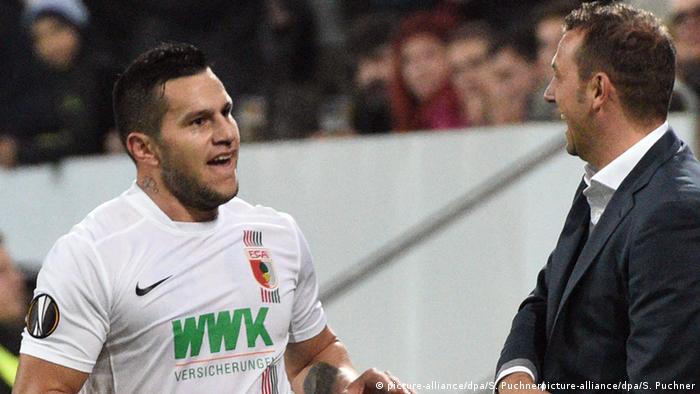 Bobadilla thought he was the match-winner

Like both Leverkusen and Gladbach have in the Champions League this season, Augsburg suffered at the hands of ruthless opposition in the Europa League on Thursday night. A mini rivial midway through the group stage left Markus Weinzierl's side with a great chance of progressing, but a three-minute brace from Aritz Adruiz in the final ten minutes left Augsburg reeling. Weinzierl's men now need at least a 3-0 win on the final matchday against take second spot back off Partizan, who jumped ahead of Augsburg after beating AZ Alkmaar 2-1.

Markel Susaeta's low drive put a dampener on a brilliant choreography before the game, and it took Augsburg until just before the 20-minute mark to match their fans for effort. Christoph Janker was denied by Aymeric Laporte's athletic defending. With half time approaching and Augsburg short of ideas, Piotr Trochowski pulled an equalizer out of nowhere after his long-range effort took a deflection of Laporte.

The goal proved a game changer for Weinzierl's team. Six minutes after the break, Dong-Won Ji rounded the keeper but Laporte slid in just in time to stop Augsburg taking the lead. A pair of subsitutions later though, and Augsburg did take the lead. Raul Bobadilla - off the bench - reacted quickest after Herrerin had saved Ji's initial shot. Augsburg had wrestled back control, but with a victory looming, Aritz Adruiz showed his class. A free header was followed by a back-post tap-in to sting Augsburg and send Athletic through to the knockouts.

Harry Kane's goal was enough to win in Azerbaijan and secure Tottenham a spot in the knockout rounds. Two draws in Group I put Basel through and left Fiorentina well placed, while Group H remains closer than ever going into the final matchday after Sporting's 4-2 win against Lokomotiv Moscow. Sparta Prague, Lazio, Villarreal and St-Etienne also secured early progression to the knockout rounds.

In the later set of games, Jürgen Klopp's Liverpool came from behind to beat Bordeaux 2-1 and secure a spot in the knockout rounds. A penalty from James Milner and a smart turn-and-finish from Christian Benteke left Klopp's men top of Group B. In Group A, Ajax's last-minute defeat of Celtic left Fenerbahce unqualified despite the Turkish side's defeat of group leaders Molde.

After a shock Bundesliga defeat to Hamburg, Borussia Dortmund were back in action in the Europa League, looking to regain some confidence even without a few of their big names. Sadly, that didn't happen. (26.11.2015)