Europa League: RB Leipzig one step closer to a second final — but would a trophy bring acceptance?

After victory over Rangers, RB Leipzig are one step closer to reaching their first-ever European final. The club hope a trophy might legitimize their place in German football, but are there some things money can't buy? 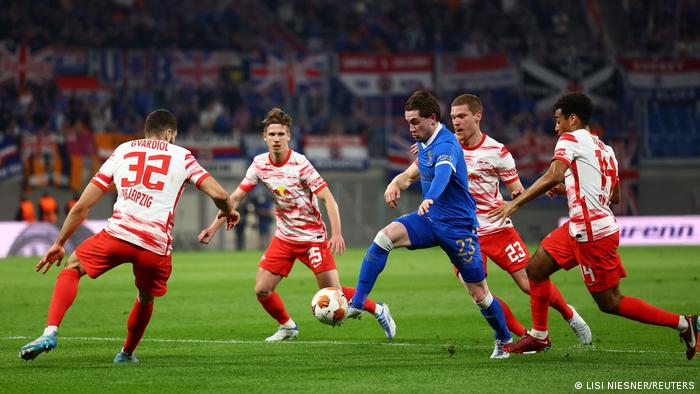 RB Leipzig are a step closer to a first-ever European final following a late 1-0 win over Rangers in the first leg of their Europa League semifinal.

After Angelino's late winner tipped the tie in RB's favor after 85 attritional minutes against the current Scottish champions, Domenico Tedesco's team need only to avoid defeat in Glasgow next week to reach the final in Seville — potentially an all-German affair against Bundesliga rivals Eintracht Frankfurt.

"A European semifinal can't always be a spectacle," Tedesco said. "Otherwise, I'd have set Rangers up with a back four and more offensively to give us more space. We had a good second half and worked some good opportunities for ourselves.

"I'm pleased that Frankfurt also won. We want to get to the final and, if it's an all-German final, that's even better."

And, having already seen off Union Berlin to reach the German Cup final, it could be a double shot at glory for the controversial club, just 13 years after its creation by energy drink manufacturer Red Bull and only six years after being promoted to the Bundesliga.

Such an astronomic rise would normally be something straight out of a fairy tale, as one local reporter suggested in an interview with a visiting colleague from BBC Scotland ahead of the game, opining that respect and acceptance for RB Leipzig are growing within Germany.

German magazine 11Freunde saw things differently, pointing out sarcastically that the rags-to-riches story has been one of, well, riches mostly, breaking transfer records in the lower leagues and shelling out over €460 million on new signings since arriving in the top flight.

But, despite the millions invested and the advantages provided by access to Red Bull's international scouting network, the club have yet to lift a major trophy, finishing second in the Bundesliga twice (2017 and 2021) and losing German Cup finals against Bayern Munich (2019) and Borussia Dortmund (2021).

The Europa League could finally quench the thirst for silverware in a city whose last participant in a European final was Lokomotive Leipzig in the UEFA Cup Winners' Cup final in 1987 — a 0-1 defeat to Ajax. But how thirsty are they really?

"In terms of atmosphere, it was ... err ..." the usually eloquent Tedesco said when asked about how emotional the evening was. "There are better atmospheres, I have to be honest with you," he said, explaining: "There have been other highlights this season already." 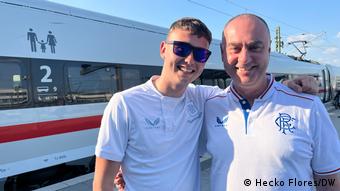 The same could hardly be said for the estimated 5,000 visitors from Scotland.

Officially, Rangers were allocated 3,000 tickets, but blue shirts could be spotted outside the away section and in all corners of the Zentralstadion, in seats that hadn't been taken up by home fans.

"I'll do anything for this club: We live for it," said Callum Samuel. The 19-year-old from Glasgow was on vacation in Cyprus with his family, but he cut his holiday short, hopped on a plane to Berlin and took a train to Leipzig along with his father. The Samuels planned on flying back to Cyprus via Bucharest in less than 24 hours of being in Germany.

With a 150-year history, Rangers are one of the oldest clubs in world football and the most successful club in Scotland. But a financial crisis and mismanagement saw the club declared bankrupt in 2012 and demoted to the fourth tier of Scottish football.

But their time in the lower divisions didn't deter the club's supporters.

"Back then we would go to grounds that didn't even have stands," said Andrew Samuel, Callum's father. "But they loved us down there: It was great business as we would bring buses packed with fans ready to spend cash. It was great for Scottish football."

The 53-year-old has had his share of ups-and-downs as a Rangers supporter, so following his club to a Europa League semifinal after their four-year stint in the lower leagues already feels like a dream. But he doesn't want Rangers' European campaign to end here.

"We won the European Cup Winners' Cup in 1972 [vs. Dynamo Moscow] when the club turned 100 years old, so why not celebrate 150 years with the Europa League?" he said, but they'll need an historic turnaround on the pitch.

"I was gutted with the late goal but still proud of the lads," Callum said after game. "It's all to play for at Ibrox."

Callum and Andrew will be among a 50,000 sellout crowd next week, although how many RB Leipzig fans make the trip remains to be seen. In the quarterfinal, while 30,000 Eintracht Frankfurt supporters took over Camp Nou in Barcelona in the quarterfinal, a mere 700 RB fans accompanied their team to Bergamo to face Atalanta, despite a squad full of exciting talent, playing attractive football and on the verge of making history.

Could a Europa League and German Cup double bring RB Leipzig the respect and acceptance they so desperately seek? Or are there some things money can't buy?

Shootout in Seville: Europa League glory for Eintracht Frankfurt after victory over Rangers 18.05.2022