After 42 years of waiting, Eintracht Frankfurt are continental champions again after a long, hot night in Seville. Around 40,000 ticketless Frankfurt fans made the journey on a night when a new Eintracht was born. 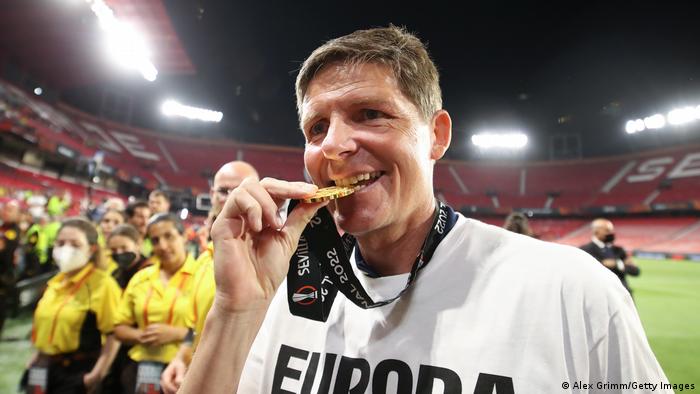 Oliver Glasner becomes only the second Austrian coach to win a major European trophy, after Ernst Happel in 1970

In the end, an entire Europa League season was settled by a single kick of the ball. It seemed appropriate that it should be Rafael Santos Borré, Frankfurt's talisman in the quarters, semis and final of this extraordinary run, who should have the final say at the end of this long night — his penalty swooshing past Rangers goalkeeper Allan McGregor to  end Frankfurt's 42-year wait for a European trophy.

At the opposite end of the cavernous, open-air Ramon Sanchez-Pizjuan stadium, the Eintracht fans — dressed in white — were sent into delirium. A moment of history was made at the same moment an all-night party was just getting started. A tense game at a loud, packed stadium had finally lurched decisively Frankfurt's way after five unsaveable penalties. "We played 13 matches in Europe and we did not lose a single one," beamed Eintracht coach Oliver Glasner.

"We took it step-by-step and, at the end, we were rewarded. I have no words to express what I feel for the players," added Glasner, whose team will now play in the Champions League, despite finishing 11th in the Bundesliga."It was incredibly intense... now we're going to celebrate for a few days."

Glasner has masterminded a defining night in the club's history and announced himself as a coach to Europe in his first season in charge of the club. He's brought success to a generation of fans that have never seen Eintracht victorious on the European stage — but this was a night when Frankfurt tore up the history books.

A close game, influenced by the extreme heat, but one that Frankfurt didn't let slip, even when they became momentarily disorientated following Joe Aribo's opener. A goal from Borré ensured a tense additional 30 minutes, and goalkeeper Kevin Trapp made a stunning save from Ryan Kent in the dying embers of extra time.

Seville had become a festival of football for this final. An estimated 100,000 Rangers fans and at least 40,000 from Eintracht had descended on the city, awash with Hessians and Glaswegians as the mercury hit 36 degrees (97 degrees Fahrenheit) on this scorching hot day.

Frankfurt President Peter Fischer had paid tribute to the sense of tradition that the finalists share, too: "We shouldn't forget Rangers," Fischer told RTL before the game. "They're a great traditional club with over 100,000 fans here — almost as many as come to my birthday parties! 10k tickets to them and to us is not our idea of football."

Rangers fans had assembled in the San Vicente quarter, while Eintracht's supporters occupied the Prado de San Sebastian park on the other side of the city — and Fischer had been here too, rallying the fans. On stage with a rapidly disintegrating voice, he grizzled: "I want to be drinking from that cup tonight!” 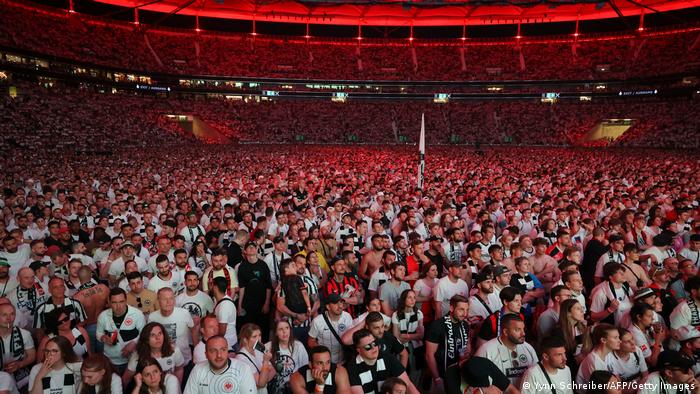 Some 50,000 Frankfurt fans at the team's stadium back home

The president got his wish. The culmination of his 22 years as the club's figurehead and charismatic leader was this night, their greatest since 1980, when Frankfurt won an all-German final against Borussia Mönchengladbach. And in true Frankfurt style, the players gave the trophy to their fans at the end of the night to enjoy,

This wasn't just about the Frankfurt fans in the stadium though. It was about those in the fanzone watching on the big screens, those watching in bars and pubs around the city, and those who had filled the Waldstadion back home. This was a victory for a club who beat Barcelona on this astonishing run and have been in the knockout stages of the Europa League in three of the last four years.

The 42-year drought is over as a new dawn has broken. The next target for this famous, old club is to ensure their fans don't have to wait so long next time.