In their second meeting in six days, Schalke and Borussia Mönchengladbach met at Veltins Arena in the Europa League. Schalke fought back to draw level, but Gladbach have the advantage. 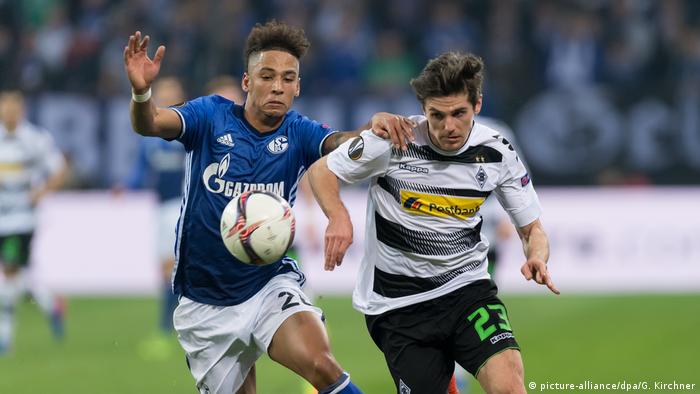 Borussia Mönchengladbach have the edge in their Europa League last 16 tie as Dieter Hecking's side survived a late Schalke rally to earn a 1-1 draw.

In a rematch of last weekend’s Bundesliga clash at Borussia-Park, Schalke were desperate to avoid a repeat of the 4-2 hammering that has further dampened their season. In fact, any kind of victory would be welcome given that they have now failed to win in six games, since their last 32 win over PAOK in this competition almost a month ago.

Things started badly for them again though, as Gladbach grabbed a vital away goal through Jonas Hofmann, who was sent clean through by captain Lars Stindl. Hofmann slotted the ball under the advancing Ralf Fährmann, who couldn’t get enough on the ball to stop it going in.

But Gladbach were unable to hang on to their lead for long. Guido Burgstaller leveled for Schalke ten minutes after going behind when Leon Goretzka played him in, and the forward lashed an unstoppable shot past Yann Sommer.

The equalizer buoyed Schalke and Sommer was called into action just before the break with a fine save low to his right from a Johannes Geis free kick, which cleared the Gladbach wall and may have been creeping in, if not for Sommer’s fingertips.

Eric Maxim Choupo-Moting was introduced with 15 minutes to go and instantly injected some urgency into Schalke’s attacks, as they pushed for a second goal to take to Mönchengladbach next week.

The Cameroonian forced Sommer to palm the ball onto his post and, moments later, created an opportunity for Burgstaller, whose powerful drive from the edge of the box took a heavy deflection and looped over Sommer but came back off the bar.

Gladbach rode their luck in the final stages as Schalke pushed for a winner, one that wouldn’t have been undeserved, but Gladbach held firm to deny an improved, but ultimately blunt Schalke. Hecking’s side will now be favourites to advance when the sides meet next Thursday at Borussia-Park for their third meeting in 13 days.

Schalke 1-1 Borussia Mönchengladbach - as it happened:

Europa League round of 16: Schalke vs. Mönchengladbach
Advertisement