There were mixed fortunes for the two German sides remaining in the Europa League. A Federico Bernardeschi free-kick condemned Gladbach to a home defeat against Fiorentina while Schalke cruised to a 3-0 win over PAOK. 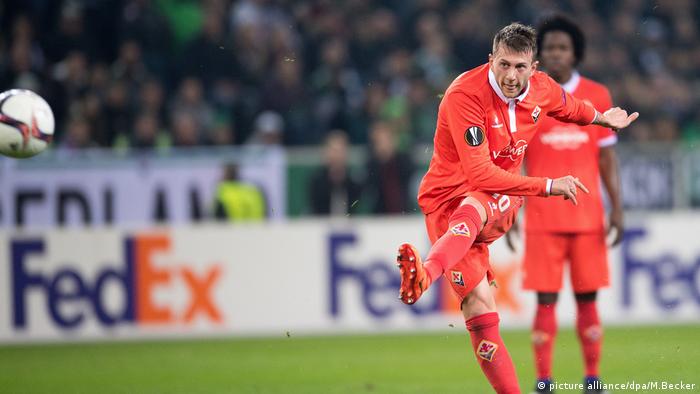 Dieter Hecking's rejuvenation of Borussia Mönchengladbach hit a significant hurdle on Thursday as they paid the price for failing to turn possession in to goals.

The hosts had won their previous four games and started confidently, almost taking the lead in the 15th minute when Patrick Herrmann linked up beautifully with Thorgan Hazard before forcing Ciprian Tatarusanu in to a smart save. Herrmann, who had just returned from injury, was a constant menace to the Italian side early on and had legitimate claims for a penalty turned down just a couple of minutes later.

Gladbach continued to enjoy territorial dominance but couldn't quite land a punch. They went close through Lars Stindl before Fabian Johnson struck the post from close range after great work by Hazard on the right.

They were made to pay for their lack of ruthlessness in front of goal just before the break when Federico Bernardeschi curled in a stunning free kick. It was Fiorentina's only shot on target of the half, but they made it count.

The second half followed a similar pattern, with the German side making much of the play but struggling to break down a stubborn Fiorentina team. After soaking up early pressure, the team eighth in Serie A should have doubled their lead through Borja Valero but the Spaniard was off-balance as he met a low cross and skewed his shot wide.

Hecking's men continued to pour forward as the clock ticked down but created little of note. They now face an uphill battle when they travel to the Stadio Artemio Franchi on February 23. 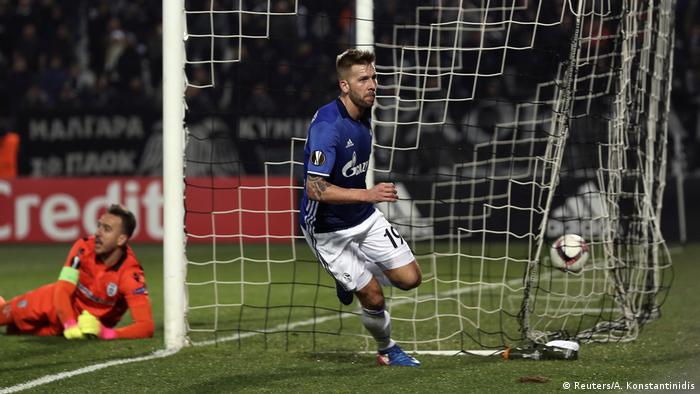 Guido Burgstaller wheels away after scoring the opener

A first-half goal from Guido Burgstaller, a late header from Max Meyer and an even later strike from Klaas-Jan Huntelaar were enough to secure Schalke a comfortable but crucial away win on Thursday evening.

The home side pinned Schalke back early on and almost found a way through, Leo Matos clipping the post after a cross found its way through a crowd of players in the box.

But as the half wore on, the German side grew in confidence and they found their reward just before the half-hour mark. Naldo met a free kick with a firm header and Burgstaller reacted quickest to blast in to the roof of the net for his third Schalke goal since joining the club in January.

The visitors had the lion's share of a second half largely characterized by attrition and finally found the second goal that was probably enough to put the tie out of the reach of a limited PAOK side. It came when Max Meyer found space to nod home Benedikt Höwedes' cross from the right.

Schalke confirmed their dominance, and almost certainly their progress in to the last 16, when Huntelaar latched on to a loose ball in the box and finished with his left foot for his 50th goal in European cup competition.

PAOK will try to overturn the deficit when they visit Gelsenkirchen next Wednesday.