The eurozone finance ministers have given the green light to disbursing the next installment in the Greek aid package, ending weeks of discussions. The money will help Greece stay afloat into next year. 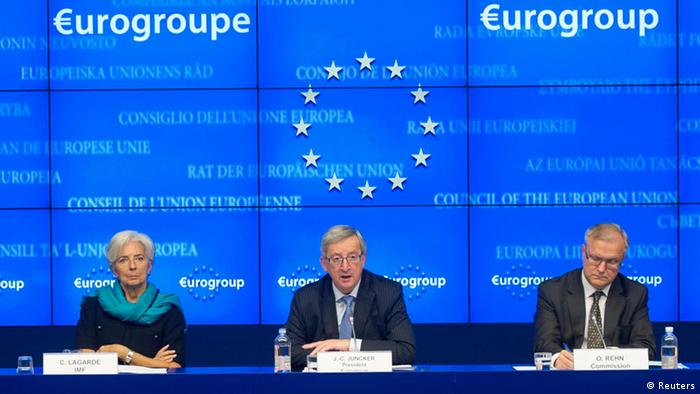 Debt-laden Greece would receive 34 billion euros ($45 billion) this month, followed by additional aid to the tune of 15 billion euros during the first quarter of 2013, the so-called Eurogroup, comprising the 17 eurozone finance ministers, announced Thursday.

The disbursement will come from the EU rescue fund, ESM, and will help Greece reduce its huge debt to 124 percent of gross domestic product (GDP) over the next decade.

"We are convinced that the [rescue] program is back on sound track," Eurogroup President Jean-Claude Juncker told reporters in Brussels.

Greecereceives the fresh funding after it successfully completed a cut-price bond buyback this week. Athens claimed that this slashed about 20 billion euros from a chunk of its debt, estimated worth about 40 billion euros at face value.

The re-purchasing of old Greek bonds was a condition for releasing the bailout tranche. Originally, it had been scheduled to be disbursed in June, but was delayed as Greece struggled to impose fresh austerity measures.

Noting that long months of uncertainty had finally come to an end for Greece, EU Economic Commissioner Olli Rehn said that Thursday's decision would re-establish trust in the eurozone in the financial markets.

Greek sovereign debt managers have confirmed the successful completion of the country's program for buying back state bonds. The scheme has left Athens with less debt, as it awaits more international loans. (12.12.2012)

Fresh financial aid is nothing but a brief respite for Greece, says former Greek Foreign Minister Dimitrios Droutsas. In an interview with DW, the member of European Parliament urged debt relief for Greece. (30.11.2012)