Euro 2016: Teamwork and drama make up for footballing shortfalls

There was a lot wrong with Euro 2016 but we should revel in the fact it became a story of the collective rather than individuals. DW’s Jonathan Harding takes a look back at a dramatic yet flawed tournament. 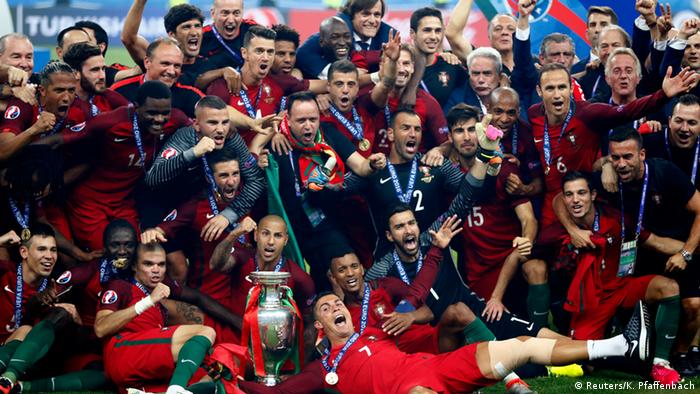 If it weren't for Iceland and Wales, Euro 2016 might have been one of the worst tournaments ever. The unwelcome and unexpected return of hooliganism, an awkward new format and hosts France's failure in the final left little room for a football party. But, like those Icelanders, something big can rise up from very little and the tournament delivered in terms of drama even if the football was often poor.

Before a single ball had been kicked, much talk surrounded the new 24-team format. Ironically, having drawn all three group-stage games and finishing third, Portugal have the new regulations more than Cristiano Ronaldo to thank for their first major title.

One side of the draw was loaded with more traditionally strong nations and Portugal certainly profited from being in the weaker half.

Graver concerns surrounded security. This was to be the safest tournament in history, and after the Paris attacks in November last year, there was no surprise vast numbers of security personnel were recruited for the occasion. Police presence was heavy daily in Paris, though from stadium to stadium the thoroughness of the checks was mixed.

At the Wales vs. Portugal semifinal for example, the checks were extensive. At other games, security guards appeared more relaxed, keener to get fans into seats.

The authorities also failed to look convincing when it came to the surprising and ugly return of hooliganism. Unsavory scenes down in Marseille and to a lesser extent in Lille appeared to catch police without a plan and dominated the headlines early on.

Sadly, on the final day frustrated supporters vented their anger by rioting after being denied entry to a full Paris fan zone. They were scenes that the tournament appeared to have left behind, but tellingly couldn't shake off even during the final encounter.

French football author Joachim Barbier told DW midway through the tournament that he felt the anti-hooligan police unit had been a "total failure" and that in any other country they would have been sacked. Often it was felt the police had been overly heavy handed, especially in firing tear gas when the trouble did not merit such a strong-armed response.

There was, however, one outstanding idea - namely the presence of foreign security personnel in France. The tense situation in Lille certainly benefited from the input of British police officers.

Fortunately though, a minority did not spoil it for the majority, as the fans became the unsung heroes of the tournament. From Northern Irish chants spreading the gospel of Will Grigg and his fire to Ireland fans constantly performing random acts of kindness, it was heartwarming to see Europe unconsciously exchange cultures all across France and its stadiums.

Unsurprisingly, Paris took a little longer to join the party. Public signs of football affection are not in the capital's repertoire. At the start, scars of the past and present wouldn't go away, but by the time France scored five to make the semifinals the red, white and blue of the tricolore started to spread. The day before the final, even the more posh parts of the city broke taboo and hung French flags from their balconies. Didier Deschamps and his men really had taken hold of the nation and according to newspaper "Liberation," even the hope of winning it all went some way to healing the wounds that terrorism had caused.

As the number of teams in the Euros dwindled at the end of the group stage, the United Kingdom voted to leave the European Union. However, in a way perhaps only sport can, the underdogs saved the tournament from being one where off-the-field topics stole all the headlines.

Iceland's run to the quarterfinals was the greatest of them all. With nearly 10 percent of their country cheering them on in France, the team showed that a combination of good coaching and real teamwork can yield success from humble beginnings. Wales showed England how to stay in Europe for longer, Ireland showed that winning isn't everything and Albania loved every minute of their first outing.

The hosts put on a show and yet right when they were on the verge of continuing the French tradition of winning on home soil, that final moment of glory eluded them.

France didn't need this tournament, but after boosting the nation by getting to the final, Les Bleus needed the win. It evaded them.

Given the backdrop of strikes, general disillusionment and worrying unemployment rates, the French team had the chance, albeit temporarily, to restore some national pride. And while "it's only football," the positive impact a French win would have had should not be underestimated.

We watched Iceland capture our hearts on and off the field, we watched tears from Gianluigi Buffon in defeat and from Dimitri Payet after turning into a national hero. We've watched big nations fall, small nations rise and every foreign fan stumble to find the rest of their sentence after Bonjour.

Yes the football has been of questionable quality with too many teams playing defensively and the bigger sides not having enough `je ne sais quoi´ to effectively break them down.

But perhaps we will look back on Euro 2016 more fondly in future. Amazingly, there were only three red cards while the player histrionics and controversial refereeing decisions which have marred many tournaments were largely absent.

Meanwhile, the logistical nightmare of Euro 2020 (13 cities host games in 13 different countries) sounds like another UEFA plan waiting to go wrong. And who knows what Europe will look like politically by then?

This tournament left us with one outstanding lesson: the value of being together.

Whether in the form of sensational fans, surprise teams or even Portugal's unattractive but effective journey to glory - with Ronaldo injured when they supposedly needed him the most - this has been a story of the collective rather than the individual.