Eugene Cernan, last man to walk on the moon, dies at age 82

Former US astronaut Eugene "Gene" Cernan has died, according to the US space agency NASA. The ex-naval officer made three trips into space, including two to the moon. 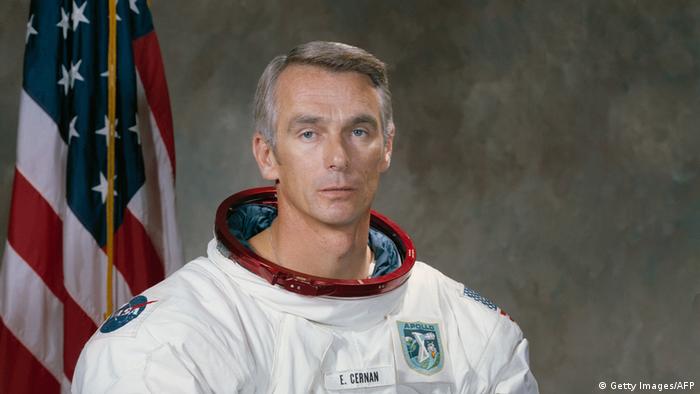 Cernan died on Monday surrounded by his family, according to a press release from the National Aeronautics and Space Administration (NASA). He was 82.

The former naval officer had the distinction of being the commander of the last human mission to the moon in December 1972. Prior to that, he had made two trips into outer space: One in 1966, when he piloted the Gemini 9 mission for a three-day flight, and one in 1969, when he served as Apollo 10's lunar module pilot.

As part of the latter mission, Cernan helped test the Apollo lunar lander in preparation for the first manned moon landing, by the Apollo 11 that same year. "I keep telling Neil Armstrong that we painted that white line in the sky all the way to the Moon down to 47,000 feet so he wouldn't get lost, and all he had to do was land. Made it sort of easy for him," Cernan said in an interview for an oral history of NASA, according to the press release.

Last man on the moon

As part of the Apollo 17 mission in 1972, Cernan spent more than three days on the moon, investigating nearby craters and the Taurus-Littrow mountains. Upon leaving the moon, Cernan said: "America's challenge of today has forged man's destiny of tomorrow. As we leave the moon and Taurus-Littrow, we leave as we came, and, God willing, we shall return, with peace and hope for all mankind."

The Apollo 17 crew is also notable for having taken one of the most iconic photos of Earth, a full view of the planet showing Africa, the Arabian Peninsula and the South Pole.

Cernan was born on March 14, 1934. After retiring from the Navy and ending his NASA career in 1976, he went into private business and became a television commentator.

John Glenn, the first US astronaut to orbit Earth and a former Ohio senator, has died at 95. Hailed as "the ultimate hometown hero," he served as a senator for 24 years and later became the oldest man in space. (08.12.2016)

US astronaut Edgar Mitchell, sixth man on moon, dies at 85

Neil Armstrong was 'the ultimate astronaut'

John Saxon, an Apollo 11 operations chief at Australia's Honeysuckle Creek, recalls the late Neil Armstrong. Saxon met the man, who became the first to walk on the moon in 1969. (28.08.2012)

Greece and Turkey hold first crisis talks since 2016 0m ago

EU demands answers from AstraZeneca over vaccine delays 3h ago