EU-US Privacy Shield: ‘America First must not mean America Only’

The EU-US Privacy Shield data-sharing deal meant to protect Europeans' personal information is up for its first review. EU Justice Commissioner Vera Jourova told DW the assessment was a "moment of truth." 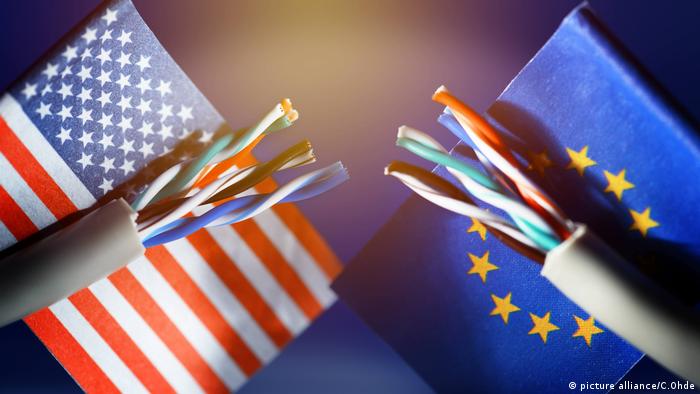 EU Justice Commissioner Vera Jourova is in Washington for the first annual review of the EU-US Privacy Shield. The data-sharing agreement is meant to strengthen the protection of Europeans whose data is stored on US servers. DW caught up with Commissioner Jourova to hear how Europe feels the deal is working out.

DW: The White House said last week it believes the Privacy Shield review "will demonstrate the strength of the American promise to protect the personal data of citizens on both sides of the Atlantic." Are you as confident as the White House  that US companies protect the personal data of European citizens as required under the Privacy Shield agreement?

Vera Jourova: I could not have it said it better. The White House statement made my day. But of course we came here to check and we want to look at a number of detailed questions about how the Privacy Shield works in practice. Because on paper, back when we adopted the Privacy Shield decision last year, I said it should deliver the protection. So we have come to check whether it is fully implemented in practice and whether everybody does what he or she is committed to do. And on the national security side we also wanted American officials to commit themselves to not applying any excessive access to data. This system is based on trust and control. And so the review will be a moment of truth.

I will be able to answer your question fully after we have analyzed all the answers we will have received here in Washington and also from the American companies which I will meet in California in the next two days. Vera Jourova has been EU Justice Commissioner since October 2014

What can you say so far about your interactions with the Trump administration and its America First approach? Are they committed to the Privacy Shield?

I think they are committed, at least what I heard from [Secretary of Commerce] Wilbur Ross. He told me several times that he understands the importance of the Privacy Shield not just for businesses, but also for the protection of privacy.

Allow me to get a little personal here. As I told you, this is a trust and check exercise. And what helped me was that I trusted [Former Secretary of Commerce] Penny Pritzker.

So do you trust her successor, Secretary Ross, as well?

I believe him when he says it is important for him. But we have to check whether this is also reflected in the everyday work of the American authorities. But of course we would be checking on the Privacy Shield regardless of who is in the administration.

There are efforts by the Trump administration to permanently reauthorize a controversial section of the Foreign Intelligence Surveillance Act (FISA) which is set to expire at the end of the year which could also impact European citizens. What is your stance on those efforts?

The Privacy Shield is dependent on the American legislation that protects the privacy of the people. This section 702, together with the Presidential Policy Directive 28, which identifies the limits of access national security bodies have to data, are the pillars of the Privacy Shield. When I was finalizing the negotiations, I said very clearly, that we Europeans would like to see in the US, as robust a law as possible, like we have in Europe, for the protection of the privacy of people. But I also said we can live with the legislation that is in place now. So now with the expiration of FISA we are of course very vigilant that the protection of privacy will not be lower than the current standard.

There is also an increasing debate in Washington whether US anti-trust laws should be used to look at the behavior and practices of major US Internet companies like Google or Amazon. Since the EU has been acting on this already, do you support such a move?

I think they should apply the American laws, whoever is concerned, exactly like we do in the EU. It is sometimes tough. But what my colleague [European Competition Commissioner] Margrethe Vestager does in this anti-trust field is nothing more than applying EU law, which applies to everyone who wants to make use of the European market.

Vera Jourova has been the European Commissioner for Justice, Consumers and Gender Equality since 2014. She has led EU negotiations for the Privacy Shield agreement with the US, which went into effect in July 2016.