The European Commission urged Russia Wednesday to end a blockade of Estonia's embassy in Moscow and said it wanted to send an EU delegation to raise the issue with Russian authorities. "We share the concerns about the increasing violence around the Estonian embassy in Moscow," said an EU external relations spokeswoman, calling on Russia to respect its international obligations on embassies and their staff.

On Wednesday evening the German ambassador to Moscow presented a diplomatic demarche to the Russian government in the name of the whole EU, setting out the EU's misgivings over the row, the German foreign ministry confirmed.

Earlier Chancellor Angela Merkel had phoned Estonian Prime Minister Andrus Ansip to assure him that Germany was doing all it could to ease the row with Russia, Estonian officials said. 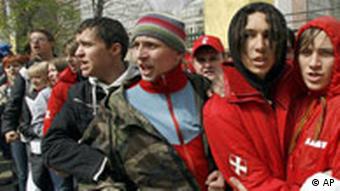 Also on Wednesday, Estonia closed its consulate within the embassy compound after pro-Kremlin youth activists blocked diplomats and scuffled with the ambassador's bodyguards in protest at the relocation of a Soviet war memorial in the Baltic state's capital Tallinn.

"The consulate's business is stopped and we will not give visas until the situation is normalized around the embassy," Ambassador Marina Kaljurand told journalists shortly after the Nashi (Ours) youth group tried to disrupt her press conference.

Consulates in Pskov and Saint Petersburg will remain open for the time being, she said.

The Russian Foreign Ministry sounded a defiant note on Wednesday as it responded to criticism of its handling of a row with Estonia by laying the blame at Tallinn's door. 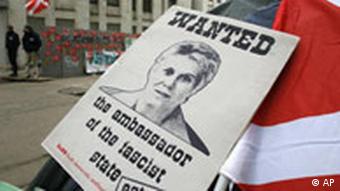 "The flame of passions and civil society's reaction in Russia were provoked by the actions of the Estonian side," Foreign Ministry spokesman Mikhail Kamynin said in remarks run by Interfax.

Last Thursday the Estonian government ordered that a Red Army monument in central Tallinn be relocated to a nearby war cemetery. The move sparked protests, which rapidly spilled over into the worst rioting Estonia has seen since the Russian Revolution.

Estonians see the monument as a symbol of their country's illegal occupation by the Soviet Union, but most ethnic Russians see it as a tribute to Russians' sacrifice in the victory over Nazism.

Kaljurand said her bodyguards were forced to use gas after members of the Kremlin-backed Nashi group broke into the newspaper offices where she was holding the press conference. 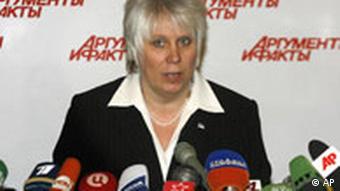 "There was an attack aimed at me, but no one got to me," she said. "There was a fight between my guards and activists from the Nashi organization and the guards had to use gas."

The Estonian foreign ministry denounced the attack and called for a swift international response.

"Physical attacks on the Estonian Republic's diplomatic representative are unprecedented and absolutely unjustifiable. These attacks call for immediate actions from the international community," the foreign ministry in Tallinn said in a statement.

Tallinn has called for help from the European Union and claims that the Russian authorities are fomenting unrest in the former Soviet republic.

"We hope that the whole issue behind this will be solved between the Russian government and the Estonian government through dialogue and negotiation," the European Commission spokeswoman said.

The European Union has promised to help end a virtual siege of the Estonian embassy in Moscow sparked by the removal of a Soviet-era war memorial in Tallinn, Estonia's Foreign Minister Urmas Paet said Tuesday. (01.05.2007)