EU Urges Members to Provide More Aid to Ex-Soviet Nations | Europe | News and current affairs from around the continent | DW | 23.02.2009

The EU Commission has called on EU nations to provide more aid for Ukraine and four other ex-Soviet states as part of a proposed "Eastern Partnership" program aimed at making the bloc's Eastern doorstep more stable. 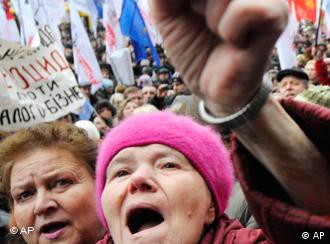 Unveiled by the European Commission last December, the "Eastern Partnership" foresees granting some 350 million euros ($448 million) in extra help between now and 2013 to the EU's ex-Soviet neighbors.

Speaking on the sidelines of a meeting of EU foreign ministers in Brussels on Monday, Ferrero-Waldner said the bloc's so-called "Eastern Partnership" had gained urgency in the wake of the August conflict between Georgia and Russia and January's gas standoff between Russia and Ukraine.

"The 'Eastern Partnership' is a very timely initiative that needs to be implemented," Ferrero-Waldner said, adding that problems in Eastern Europe "affect us directly."

Eastern Europe has been hard hit by the global slowdown with many countries facing rising popular anger as cash-strapped governments cut spending.

Ukraine, which received billions in aid from the International Monetary Fund last year, has seen widespread demonstrations as its economy crumbles and savers rush to pull out money from banks.

The plan aims to promote economic and political stability in the countries and reduce Russia's influence in the region. It includes free trade agreements, visa waivers, financial aid and economic integration with the EU.

In return, the eastern neighbors are expected to step up progress toward economic modernization, democracy, the rule of law and human rights.

The "Eastern partnership" scheme is to be approved at an EU summit next month and launched in May.

But some EU member states have expressed reservations about the proposal.

France, which pushed the EU's Mediterranean Union project last year, is reported to fear that increasing funding to the bloc's eastern neighbors would shift the EU's strategic focus away from North Africa and the Middle East.

German Chancellor Angela Merkel said her country was ready to help eastern European countries experiencing economic difficulty. Aid would come mainly via the IMF and likely go to nations outside the euro zone. (19.02.2009)

Top economic powers urged action to help the world scramble out of a deepening recession, as their stimulus plans came under scrutiny on Friday at high-stakes talks of the Group of Seven finance leaders. (13.02.2009)