EU to limit exports of lethal injections to the US | Europe| News and current affairs from around the continent | DW | 12.12.2011

EU to limit exports of lethal injections to the US

New EU restrictions on the export of sedatives will make it harder for authorities in the United States to get hold of sedatives used to carry out lethal injections. That could lead to delays for those on death row. 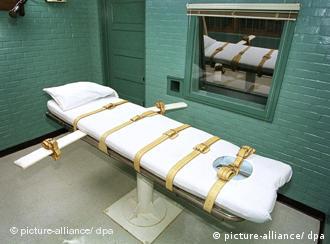 Around 100 people are executed every year in the US

The European Union is reported to be close to banning exports of a sedative used to carry out lethal injections in the United States. According to a report by the German daily Süddeutsche Zeitung, the export of Thiopental Natrium would in future only be permitted under special license.

In the USA, where some 100 people are executed every year, there has been a recent scarcity of Thiopental after its US manufacturer, Hospira, refused to sanction its use for executions and withdrew it from the market.

The substance is mainly used in the states of Ohio and Washington, and is also a key ingredient of the deadly cocktail used in 33 other US states.

Germany's former health minister and current economy minister, Philipp Rösler, has called on German manufacturers to not to sell the product to the US.

According to the Süddeutsche Zeitung, a number of anesthetic substances are to be included in the new EU export regulations, which is to be published on Friday.

US carries out execution despite international protests

Despite intervention from former President Jimmy Carter, Archbishop Desmond Tutu and Pope Benedict XVI, the US state of Georgia has executed Troy Davis by lethal injection. (22.09.2011)

Germany calls for stay of execution in Bahrain

The German government says the death sentence imposed by Bahrain on four Shiite men found guilty of killing two policemen at a protest in March is "draconian." Berlin has urged a stay of execution. (29.04.2011)

The Dutch government said it was freezing contacts with Iran after the hanging of an Iranian-Dutch woman. The woman was executed for drug smuggling after initially being arrested for taking part in protests in 2009. (29.01.2011)