After years of calling for the death penalty to be abolished worldwide, the European Union is taking concrete steps to impede executions, at least in the United States. 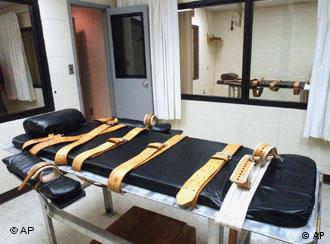 Starting this Wednesday, US states that administer lethal injections will have to look even harder to find a sedative legally required for the practice.

The European Union on Tuesday ratcheted up export controls on sedatives such as sodium thiopental, pinning European exports of the substances to assurances that they will not be used in capital punishment.

"As of today, trade of certain anesthetics, such as sodium thiopental, which can be used in lethal injections, to countries that have not yet abolished the death penalty, will be tightly controlled," a statement from the European Commission said.

A shortage of sodium thiopental, which is no longer produced in the US, has already led to delays and cancelations of executions in five states, according to the US Death Penalty Information Center. The Center reported fewer executions in 2010 over previous years, partly due to the shortage.

Sodium thiopental is the first of three drugs administered in lethal injections to stop breathing and heart activity. The main European producers of the drug are in Britain, Italy, Germany, Austria and Denmark, an EU official said.

Increasingly, manufacturers of sodium thiopental are taking stands against its use in administering the death penalty.

The drug's only US manufacturer, Hospira Inc., announced in January it was halting the drug's production, because it did not want it used in executions.

Earlier this year, Britain imposed an emergency export ban to the United States on sodium thiopental, along with three other drugs used in lethal injections. Swiss company Novartis announced in February it had taken steps to prevent a generic version of sodium thiopental from being exported to the US.

In April, Indian drugmaker Kayem Pharmaceuticals also stopped its supply of the drug for US executions, saying execution contradicted the "ethos of Hinduism."

However, Danish firm Lundbeck announced in June that it would continue the sale of Nembutal, generically known as pentobarbital - another drug that falls under new restrictions - as some patients required it to treat epilepsy.

Capital punishment is banned in the 27-member European Union, which since 2008 has called for a worldwide stop to the death penalty.

Gunshot to the back of the neck: that's how authorities in Belarus carry out the death sentence. Dmitri Konovalov and Vladislav Kovalyov face this punishment. They have been convicted of bombing a Minsk metro station. (30.11.2011)

'The death penalty is not justice, it's revenge'

Monday marks the World day Against the Death Penalty. Deutsche Welle spoke to an expert at Amnesty International about the recent Troy Davis' execution and the gulf between the US and Europe on the death penalty. (10.10.2011)

US carries out execution despite international protests

Despite intervention from former President Jimmy Carter, Archbishop Desmond Tutu and Pope Benedict XVI, the US state of Georgia has executed Troy Davis by lethal injection. (22.09.2011)