EU Says Hamas Must Change to Win its Support | Europe | News and current affairs from around the continent | DW | 30.01.2006

EU Says Hamas Must Change to Win its Support 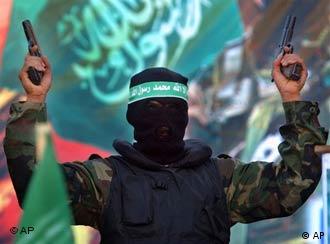 The European Union, the biggest donor of aid to the Palestinians, is considering its relations with the Palestinian Authority after last week's election victory by an organization which has mounted countless suicide attacks on Israel.

"They have been a terrorist organization. They have to change their methods and they have to accept that violence is incompatible with democracy," Solana told AFP as he arrived for a day of talks in Brussels.

"They have to also recognize Israel, because in the end what we are trying to do is construct a two-state model and to do that, you have to talk to the other," he added.

The Brussels meeting is the first chance for the 25-nation bloc's ministers to talk since the long-ruling Fatah faction lost last week's Palestinian elections to Hamas.

The EU is unlikely to take any rash decisions. Diplomats stress it has time while waiting for a Palestinian government to be formed, and in the meantime Palestinian Authority head Mahmoud Abbas remains its key contact.

"We would like very much to support President Abbas at this period of time," said Solana. "This is what we are going to do today."

US looks to EU for resolve

The United States expects Europe to show as much resolve with Hamas as it has in vowing to cut aid to the Palestinians if the radical Islamic group fails to renounce violence, US Secretary of State Condoleezza Rice said on Sunday.

"First of all the Europeans also list Hamas as a terrorist organization," Rice said after arriving in London, where she is meeting with representatives of the other members of the Mideast peace process Quartet: the European Union, Russia and United Nations. 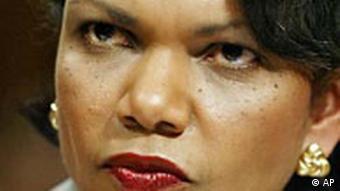 "Supporting a peace process on the one hand... and on the other hand, supporting the activities of a partner in that set of negotiations which does not recognize the existence of the other partner, it just does not work," she said.

Rice underlined that the quartet partners have "forged a very strong consensus about the way forward" in the Middle East.

US President George W. Bush last week warned of cuts in US aid to the Palestinians if Hamas does not dissolve its armed wing and renounce threats against Israel.

"If they don't, we won't deal with them. Aid packages won't go forward," Bush told CBS television in an interview.

The US hopes that economic pressure will elicit a renunciation of violence from Hamas.

"I do think that it is important that Hamas now has to confront the implications of its government if it wishes to govern," Rice

Just ahead of Chancellor Angela Merkel's visit to the Palestinian territories, the German government has called on the radical Islamist group to renounce violence and recognize the state of Israel. (Jan. 28, 2006)

The shock win by Hamas in Palestinian polls has placed the EU in a quandary. Should it continue its annual generous cash injections into the Palestinian territories even if a "terror group" is in power? (Jan. 27, 2006)

Chancellor Angela Merkel and Acting Israeli Prime Minister Ehud Olmert made a joint pledge not to deal with the radical Islamist Hamas until it recognized Israel's right to exist and renounced violence. (Jan. 30, 2006)