Germany Urges Hamas to Reject Violence | Germany| News and in-depth reporting from Berlin and beyond | DW | 28.01.2006

Just ahead of Chancellor Angela Merkel's visit to the Palestinian territories, the German government has called on the radical Islamist group to renounce violence and recognize the state of Israel. 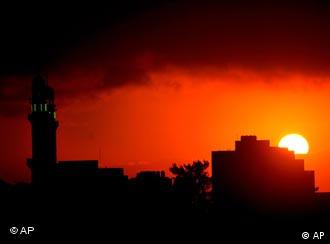 It is a time of political turmoil in the Middle East

German Foreign Minister Frank-Walter Steinmeier on Saturday called on Hamas to give up violence and acknowledge Israel's right to exist. His statements come just two days ahead of the chancellor's first visit to the Middle East.

Merkel, who will travel to the region for the first time since her election, is also the first international leader to visit the Palestinian territories since Hamas victory in last week's dramatic national elections. She will, however, not meet with the Islamic group.

In an interview with German news weekly Der Spiegel Steinmeier said that while Germany accepted the outcome of the free elections, "Hamas must give up violence and recognize Israel's right to exist."

"Terrorism and democracy do not match," he stressed. "Votes for Hamas were not votes against peace or for a religious or ideological radicalization but for reforms in Palestine. We must respect this wish."

Hamas won an overwhelming majority, capturing 76 of the 132 seats in the national parliament, leaving the Fatah party a distant second.

Israeli Ambassador to Germany Schimon Stein called on Merkel to insist in her talks with Abbas that he respect his promise to disarm Palestinian fighters.

"This is the moment of truth: this promise must be kept," Stein said in an interview with German news agency DPA. The item should be high on Merkel's agenda when she visits the West Bank town of Ramallah on Monday, he said.

Stein appealed to Germany and the European Union to make it absolutely clear that there is a fundamental contradiction between an armed group sponsoring terrorist activities and the building of a democratic state.

According to Paul Spiegel, the head of the Central Council of Jews in Germany, Berlin plays a very important role in the peace process. Under no circumstances whatsoever should Germany conduct talks with Hamas as long as they continue to fight for the destruction of Israel.

The shock win by Hamas in Palestinian polls has placed the EU in a quandary. Should it continue its annual generous cash injections into the Palestinian territories even if a "terror group" is in power? (Jan. 27, 2008)

German Chancellor Angela Merkel, the first foreign leader to visit the Palestinian territories since elections there, will not meet Hamas officials despite the radical Islamic group's dramatic victory. (Jan. 28, 2006)