EU Presses Ahead With Treaty Ratification Despite Irish ″No″ | Europe | News and current affairs from around the continent | DW | 18.06.2008

EU Presses Ahead With Treaty Ratification Despite Irish "No"

Ahead of a summit in Brussels, the European Union called Wednesday for the ratification process of the Lisbon Treaty to continue despite its crushing rejection by Irish voters last week. 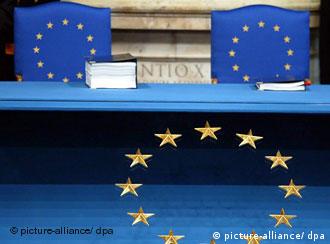 A planned two-day European Union summit which opens on Thursday, June 19, meant to focus on weighty topics such as rising oil prices is likely to be overshadowed by the institutional crisis plaguing the bloc after Irish voters last week resoundingly rejected the Lisbon treaty.

Ireland plunged the European Union into chaos last week when 53 percent of voters rejected the treaty meant to streamline the bloc's cumbersome institutions and to make it more efficient after a recent eastward expansion.

Slovenian Prime Minister Janez Jansa, who will act as chair for the last time as president of the European Union, insists that "not a single item has been dropped from the official agenda because of what happened in Ireland."

"Leaders will want to show that they are paying attention to what matters to consumers, which is oil and food prices," one diplomat told news agency DPA.

Yet despite their best intentions, EU leaders will inevitably focus on the institutional chaos sparked by Ireland's rejection of the Lisbon Treaty.

European Commission President Jose Manuel Barroso called on the EU heads of state and government to take time at Thursday and Friday's summit in Brussels to find a consensus together with Ireland. 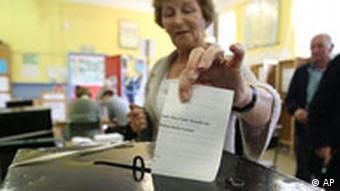 Irish voters were emphatic in their rejection of the Lisbon treaty

"We must work very closely with the Irish government to help solve this problem," Barroso told members of the European Parliament in Strasbourg on Wednesday after being harangued by a group of deputies wearing green sweat shirts emblazoned: "Respect the Irish Vote."

But the Social Democrats warned of a "crisis of trust" in EU institutions. It was worrying that all the major Irish parties had called for a yes vote and the electorate had still voted no, Social Democrat faction leader Martin Schulz said.

On Wednesday, Schulz called for Irish EU Commissioner Charlie McCreevy to be removed from his post, accusing him of contributing to Ireland's rejection of the Lisbon Treaty.

"Mr McCreevy, responsible for the internal market, seen as a threat by European citizens, said he had not read the Lisbon Treaty," German Martin Schulz, told the European Parliament in Strasbourg. "How van you create confidence with this kind of behavior?" a visibly angry Schulz said.

Ireland was the only EU member that held a popular vote to approve the treaty, as required by the country's constitution.

So far, 18 of the 27 EU parliaments have approved the treaty, with Britain's upper house due to vote later Wednesday. All 27 member states have to ratify the treaty for it to take effect.

Members of the unelected upper chamber, the House of Lords were to debate the Lisbon Treaty for the third and final time, as part of the ratification process that Prime Minister Gordon Brown insists must continue.

No one quite knows how to pull the EU out of its latest institutional quagmire.

Diplomats say leaders will listen carefully to what Irish Prime Minister Brian Cowen has to say, and will then take time to think things over.

According to leaked results of an EU survey published on Tuesday by the Irish Independent, many of the people who voted no in the referendum did so either because they did not understand the treaty, or because they had other concerns, such as immigration and unemployment. 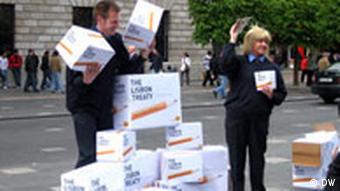 Handing out the treaty to Irish voters was not a bad idea - but who really read it and understood it?

Moreover, 70 percent of those who rejected the treaty thought it could be easily renegotiated. One possible solution is for Ireland to be granted a number of concessions before being asked to vote again, either in the autumn or early next year.

In the meantime, leaders have called for the remaining eight national parliaments to ratify the treaty and have avoided talking about a "two-speed Europe," whereby some member states would go ahead with further integration, leaving the sceptics behind.

"We want to continue with a one-speed Europe," Slovenian Prime Minister Janez Jansa said on Tuesday.

The Slovenian premier has been playing down the impact of the Irish vote, pointing out that the euro rose against the dollar in the immediate aftermath of the vote.

Barroso hits out at EU members

Barroso suggested the Irish referendum had been hijacked by misplaced fears and he took a swipe at EU member nations -- which hold the real power in Europe -- who blame the EU institutions for their political woes at home.

"Years of treating European institutions as a convenient scapegoat leave fertile ground for populist campaigns," he said. "You cannot bash Brussels and Strasbourg from Monday to Saturday and expect citizens to vote in favor of Europe on Sunday."

Luxembourg Prime Minister Jean-Claude Juncker said he was alarmed at the reaction of large EU countries, particularly Germany, to Ireland's rejection of the Lisbon Treaty. (17.06.2008)

Still reeling from Irish voters' rejection of the European Union's reform plans, the bloc's foreign ministers are meeting Monday, June 16 to discuss how to proceed. (16.06.2008)