EU Ministers Look for Way Forward After Irish Treaty Shock | Europe | News and current affairs from around the continent | DW | 16.06.2008

Still reeling from Irish voters' rejection of the European Union's reform plans, the bloc's foreign ministers are meeting Monday, June 16 to discuss how to proceed. 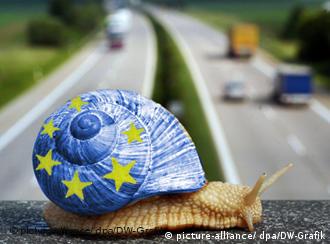 Is European unification bound to slow down?

The European Union's foreign ministers Monday called on Ireland to explain the country's rejection of the Lisbon Treaty, warning that no quick solutions were in sight.

"Ireland signed the Lisbon Treaty, it is up to her to find a solution," Danish Foreign Minister Per Stig Moeller said at a meeting in Luxembourg.

But his Austrian colleague, Ursula Plassnik, said it would be unfair to isolate Ireland and called on all 27 member states to come up with a way out of the impasse.

"We are not going to put anyone in a corner, let alone the Irish. We must be fair towards them and listen to what they have to say," Plassnik said.

Irish Foreign Minister Micheal Martin said he needed to get a better idea of why voters rejected the first treaty before committing the country to a re-vote.

"The people's decision has to be respected and we have to chart a way through ... It is far too early for proffering any solutions or proposals," Martin said as he arrived at the meeting in Luxembourg on Monday. "There are no quick fix solutions."

Eighteen of 27 EU countries have already ratified the Lisbon Treaty, which is designed to streamline how the bloc does business. But every country needs to ratify the treaty before it can take effect. 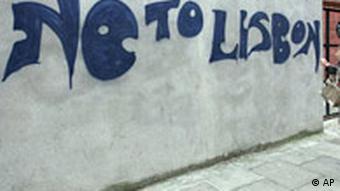 There were many reasons why the Irish voted "no"

There have been concerns that the "no" vote in Ireland, the only place where the treaty was subject to a public referendum, could be enough to sink the entire EU reform project.

Yet the bloc's foreign ministers said they were determined to find a way forward.

The German foreign ministry said Monday it was "conceivable" that Ireland would not take part in EU decision-making after its voters rejected the bloc's Lisbon Treaty, but stressed this was not the preferred solution.

"No one wishes or wants and no one wants to exclude another member state against its own wishes from the EU decision-making process," ministry spokesman Martin Jaeger said. "But there could be ... scenarios where for example a member state under certain circumstances says, 'I am refraining from taking part in certain decision-making processes'," Jaeger told a news conference.

He added though that this was "exactly what we do not want."

Berlin "therefore welcomed very much that our Irish friends signaled at the weekend that they remain interested in the integration of Europe continuing and that they want to talk to us intensively in this framework," he said.

"Our aim remains clear. We want to stick to this treaty. The treaty is necessary for Europe. It makes Europe more efficient, more democratic and more transparent."

But Slovenian Foreign Minister Dimitrij Rupel, whose country holds the rotating EU presidency, warned against any hasty bid to save the treaty.

"It would be risky to say we are going to bring the treaty back to life when we are facing a blockade," he said.

No easy solutions to Ireland crisis 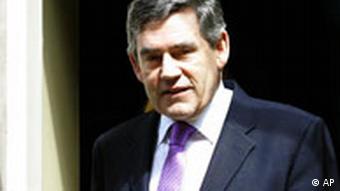 Will Britain's Gordon Brown stand behind the treaty?

EU leaders have been accused of ignoring the concerns of citizens as they have pushed forward with the Lisbon Treaty. Irish voters rejected the treaty for many reasons, chief among them concerns that the treaty would alter the country's abortion laws, tax legislation and neutrality.

Luxembourg's Foreign Minister Jean Asselborn proposed that the EU write a declaration reassuring the Irish that the treaty would not impact these issues. Most other EU leaders hedged their bets about the best way to proceed.

Even with the Irish rejection of the treaty, most EU leaders have called for the eight countries which have not yet ratified the treaty to do so. If everyone else was on board, Ireland would come under enormous pressure to hold a new referendum. Yet there were concerns that the governments of other countries will also back away from their support of the treaty.

The leaders in Britain and the Czech Republic are considered euroskeptics, and there is no assurance that they will push ahead with treaty ratification. 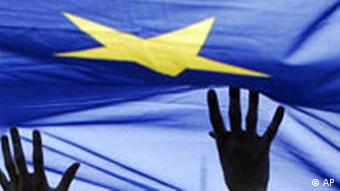 The EU has no clear way forward

French President Nicolas Sarkozy, whose country takes up the EU's rotating presidency on July 1, will meet with Czech leaders Monday to make sure they are on board.

The aim will be to see if "they are committed to follow up on their ratification process," a senior EU diplomat told the news agency AFP, after Czech President Vaclav Klaus remarked that the reform treaty was dead.

"You can count on the president not to leave Europe malfunctioning," French Secretary of State for European Affairs, Jean-Pierre Jouyet, said in an interview on Sunday.

He stressed that Paris was counting on a political deal at this week's EU summit which would give the French EU presidency "all means possible for implementing essential policies for Europe."

Germany's interior minister has called for more transparency in the European Union, following Ireland's rejection of the EU reform treaty. One of his proposals is the direct election of the European Commission president. (15.06.2008)

French President Nicolas Sarkozy has called Ireland's "no" to the EU's Lisbon Treaty a call to change the way Europe was being constructed. But he has also urged other states to continue the ratification process. (14.06.2008)