EU Opposes Boycott of Beijing Olympics as Tibet Unrest Escalates | Europe| News and current affairs from around the continent | DW | 17.03.2008

The European Union is opposed to a boycott of the Beijing Olympic Games over China's crackdown on pro-independence protests in Tibet amid mounting fears the violence may end up hurting sports. 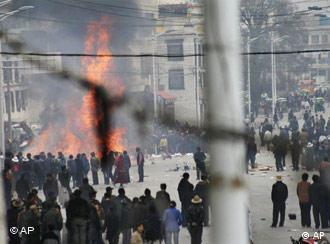 The Tibetan capital Lhasa has been rocked by violence

The EU's Slovenian presidency said on Monday, March 17 that the bloc remained firmly opposed to boycotting the Olympic Games in Beijing in August in the wake of China's bloody repression of protests in Tibet that have left several people dead and injured scores.

A boycott would "greatly damage' sport," Slovenian sports minister Milan Zver was quoted by the STA news agency as saying at the start of a meeting of EU sports ministers and EU National Olympic Committees at the Brdo pri Kranju Castle, north of Ljubljana

Zver added that he was also personally against the idea of a boycott, STA reported. "I hope that sport is still an instrument for intercultural dialogue,'" Zver said, adding that discussion about a possible boycott would be 'hard to avoid' at the EU meeting. Negative publicity Violence has flared in Tibet and neighboring provinces after five days of protests in Lhasa, the Tibetan capital, in what is seen as the greatest challenge to Beijing's authority in the region for nearly 20 years, when an uprising was brutally suppressed by authorities, rights groups have said. 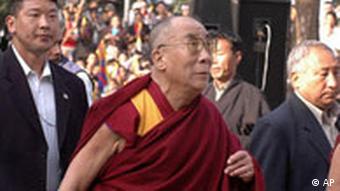 The Dalai Lama has spoken of "cultural genocide" in Tibet

The turmoil has brought a wave of negative publicity for China ahead of its hosting of the Olympics Games and has sparked an international discussion about a boycott.

Tibet's spiritual leader the Dalai Lama on Sunday condemned what he called China's "rule of terror" and "cultural genocide" in Tibet after reports of heavy casualties among protesters. But he refrained from calling for a boycott of the Beijing Olympics, as many Tibetan exiles have been demanding. "Building bridges not walls" Most European governments and sports officials have ruled out boycotting the Games. On Monday, the German government reasserted it was opposed to a boycott. German Chancellor Angela Merkel's spokesman said the government "explicitly did not share" calls to boycott the Olympic Games in Beijing in August.

"The German government doesn't support calls to boycott the Olympics in Beijing. That would only affect athletes who have been preparing for years for the Games, "Thomas Steg said in Berlin.

"From the point of view of the chancellor, the problems in the region can only be resolved through a peaceful dialogue between Beijing and the Dalai Lama," Steg said.

He said Germany "understands and supports the will for cultural and religious autonomy" among Tibetans but also "the territorial integrity of China and everything that goes along with a 'one China' policy."

Thomas Bach, the German vice president of the International Olympic Committee (IOC) said a boycott would not solve the crisis.

"The more difficult a situation, the more important the spirit of dialogue and reconciliation associated with the Olympics becomes," Bach said in an interview with German radio station, Deutschlandfunk. "The aim of the Olympic Games is to build bridges and not walls," Bach said.

He pointed out that boycotts had proved unsuccessful in the past. The Games were boycotted in 1980 in Moscow and in Los Angeles in 1984.

Sport organizations aren't a world government and can't resolve problems "that a generation of UN secretary-generals and heads of states haven't solved," he said.

However, some politicians have raised the possibility of using a boycott as a tool to step up pressure on China.

"Dealing carefully with the People's Republic of China requires that you not completely rule out something like this (a boycott)," Roland Koch, a member of Chancellor Merkel's conservative Christian Democrats (CDU) and the premier of the state of Hesse said on Monday.

At the same time everyone should be clear that such a boycott would be the last thing the international community should resort to," Koch said.

Koch, who has been a close friend of the Dalai Lama for years, also urged the Chinese government to stop expelling journalists from Tibet.

"Diplomats and journalists must have immediate access to the Tibetan region," Koch said. "The images of what's happening in Lhasa belong out there in the world."

Are you in favor of a boycott of the Olympic Games in Beijing in August? Please include your name and country in your reply.